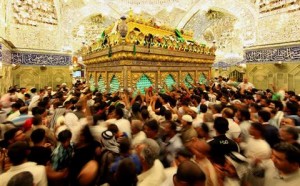 Ten car bombs exploded across the Iraqi capital on Monday, killing nearly 40 people in markets and garages on the evening of a Shi’ite Muslim celebration, police and medical sources said.

Some of the attacks targeted districts where Shi’ites were commemorating the anniversary of the birth of a revered Imam, but there also were explosions in mixed neighborhoods and districts with a high population of Sunnis.

The violence reinforced a growing trend since the start of the year, with more than 1,000 people killed in militant attacks in May alone, making it the deadliest month since the sectarian bloodletting of 2006-07.

Waleed, who witnessed one of Monday’s explosions in which five people were killed in the Shi’ite stronghold of Sadr City, described a scene of chaos: “When the explosion happened, people ran in all directions.”

“Many cars were burned, pools of blood covered the ground, and glass from car windows and vegetables were scattered everywhere.”

Eight people were killed in two car bomb explosions in the central district of Karada, one of them in a car garage. Two car bombs exploded simultaneously near a market in the western district of Jihad, killing eight.

Separately, a bomb placed in a cafe in the northern city of Mosul killed five people, pushing Monday’s death toll over 40.

Since the withdrawal of U.S. troops in December 2011, critics say Shi’ite Prime Minister Nuri al-Maliki has consolidated his power over the security forces and judiciary, and has targeted several high-level Sunni leaders for arrest.

Sunnis took to the streets last December in protest against Maliki, but the demonstrations have thinned and are now being eclipsed by intensifying militant activity.

Sectarian tensions have been inflamed by the civil war in Syria, which is fast spreading into a region-wide proxy war, drawing in Shi’ite and Sunni fighters from Iraq and beyond to fight on opposite sides of the conflict.

Political deadlock in Baghdad has strained relations with Iraq’s ethnic Kurds who run their own administration in the north of the country, and are at odds with the central government over land and oil.

Photo: Shiite Muslim worshippers gather at the holy shrine of Imam Abbas during the annual festival of Shabaniyah, which marks the anniversary of the birth of the ninth-century Shiite leader known as the Hidden Imam, in Karbala,south of Baghdad, Iraq, Monday, June 24, 2013. (AP Photo/ Hadi Mizban)