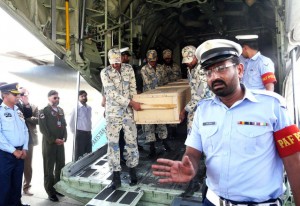 In one of the most brazen attacks on foreigners in Pakistan in recent years, gunmen disguised as paramilitary police shot dead 10 tourists, including one American, and their Pakistani guide on a mountain-climbing expedition in the country’s rugged north, officials said.

The attack occurred at the foot of Pakistan’s second-highest peak, Nanga Parbat, highlighting the growing reach of Islamist militants in even the most remote areas. It is also likely to damage the country’s already struggling tourist industry.

A spokesman for the Pakistani Taliban claimed responsibility for the killings, which he said were in retaliation for American drone strikes in the tribal belt.

The dead included five Ukrainians, two Chinese, one Nepalese, an American citizen of Chinese origin and their Pakistani guide, according to officials from Pakistan, Ukraine and the United States. The identity of the 10th tourist was not made clear.

The attack occurred in remote Gilgit-Baltistan, a beautiful, mountainous part of northern Pakistan where attacks on foreigners have been rare in recent years, although there has been sporadic sectarian violence. The foreigners were part of an expedition that planned to scale Nanga Parbat, which, at 26,660 feet, is the world’s ninth-highest mountain.

The local police said that there were about a dozen attackers. One Chinese climber who has been wounded in the attack was later rescued, the minister said.

In a telephone interview, the Taliban spokesman, Ehsanullah Ehsan, said that the gunmen belonged to a Taliban affiliate named Jundul Hafsa, and that the attack was a response to an American drone attack that killed the Taliban deputy leader, Wali ur-Rehman, on May 29.

A group of the same name — believed to be an offshoot of the notorious sectarian outfit Lashkar-e-Jhangvi — attacked a bus carrying minority Shiites in Gilgit-Baltistan earlier this year, said a security official in Peshawar speaking on the condition of anonymity.

Mr. Khan received the bodies of the victims at a military air base near Islamabad late Sunday. Diplomatic representatives from China, Ukraine, Nepal and Russia were also present.

A spokesman for the United States Embassy in Islamabad confirmed that an American citizen was among the dead but could not say whether he had dual citizenship in China or elsewhere.

Coming one week after an audacious militant assault in the western city of Quetta, where gunmen attacked a bus carrying women, then laid to siege to the hospital where survivors from the attack were being treated, the attack Sunday highlighted the determination of Islamist fighters to challenge the writ of Prime Minister Nawaz Sharif’s recently installed government.

Until now, mountaineers were considered one of the few groups that remained impervious to the perceived perils of visiting Pakistan. Drawn by the challenge of climbing some of the world’s most spectacular yet forbidding peaks, their greatest danger stemmed from the mountains themselves.

Nanga Parbat is known as the “killer mountain” among mountaineers, and the Pakistan Army has assisted in several daring high-altitude rescues of climbing expeditions that had gotten into trouble.

But Sunday’s attack introduced a new element of risk that is likely to affect such expeditions, at least in the short term.

The camp where Sunday’s attack occurred is at an altitude of nearly 15,000 feet and takes two days to reach by foot, said Amjad Ayub, president of the Pakistan Association of Tour Operators. The camp’s remoteness highlighted the determination of the attackers.

“They seem to have been well prepared,” Mr. Ayub said. “Only the fittest can survive in that environment.”

Expeditions typically prepare and acclimatize for up to three months before starting their ascent on Nanga Parbat, he said. Three other expeditions are currently on the mountains and are believed to be safe.

Mr. Khan, the interior minister, said the government had suspended the police chief and the chief secretary of Gilgit-Baltistan. He portrayed the attack as an attempt to disrupt Pakistan’s relations with other countries.

In a statement, the Foreign Ministry described the attack as “a heinous crime” that appeared to be an attempt “to disrupt the growing relations of Pakistan with China and other friendly countries.”

Attacks on Chinese nationals are particularly sensitive in Pakistan because the two countries enjoy warm diplomatic relations, in contrast to Pakistan’s more turbulent ties with the United States.

China’s Foreign Ministry of Foreign Affairs, in a strongly worded statement issued through the Xinhua news agency, expressed its “deep shock” at the attacks. It asked the Pakistani government to apprehend the attackers and “to take measures to protect the safety and legitimate rights and interests of Chinese nationals in Pakistan.”

Mr. Sharif, the prime minister, condemned the attack and said his administration would make every effort to ensure Pakistan is safe for tourists.

Photo: Pakistani air force personnel carry coffins of foreign tourists as they are unloaded from a plane upon arrival at Chaklala airbase in Rawalpindi on June 23, 2013 after gunman killed 10 climbers at their base camp in Pakistan’s mountainous northern region.