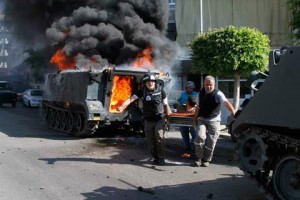 Clashes broke out in in Abra, east of the southern Lebanon city of Sidon on Sunday, claiming the lives of at least five army soldiers and stoking fears that violence triggered by the war in Syria will increasingly engulf its smaller neighbor.

Two gunmen loyal to an anti-Hezbollah sheikh were also killed in the clashes , security sources said, in an act the Army deemed as a cold-blooded attack on the military which called for an “iron fist” approach to deter further aggression.

The army said the fighting began when supporters of Shiekh Ahmed Assir, an outspoken Sidon cleric, launched a surprise attack on one of its checkpoints in the Abra neighborhood of the city, 25 miles south of the capital. Lebanese television said that the army had earlier arrested several of his supporters.

“What happened today in Sidon went beyond all expectations,” the army said in a statement. “The army was targeted in a cold blooded and deliberate attack.”

The Army said three of its members, including two officers, were killed in the attack .

“Without any reason, an armed group belonging to Sheikh Ahmed Assir attacked an Army checkpoint in Abra-Sidon, killing two officers and a private; and wounding several others in addition to destroying several military vehicles,” the statement said.

Assir, known for his tirades against Iran-backed Hezbollah’s influence over the Lebanese state and army, posted a video online Sunday calling for Sunni soldiers to defect from the army, which he lambasted as “Iranian and Shiite”.

“To all our partisans, we are being attacked by the Lebanese Army, which is Iranian and Shiite,” Assir said in the video. He claimed the Army belonged to the “shabiha [thugs]” of Hezbollah leader Hassan Nasrallah and his ally, Parliament Speaker Nabih Berri, who heads the Amal Movement.

“I call on all partisans to block roads and all honorable Sunni and non-Sunni [soldiers] to quit the Army,” added Assir, who appeared in black pants and a black T-shirt with an assault rifle at his side.

According to media reports the military post, located on the road to Abra – not far from the Bilal bin Rabah Mosque where Assir preaches – was struck by rocket-propelled grenades.

They said Assir’s fighters also relied heavily on RPGs in the clashes that ensued. One armored personnel carrier was set ablaze after receiving a direct RPG hit, they said.

Smoke billowed over the neighborhood and at least one building caught fire.

Sidon’s main highway, which links it to Beirut and the rest of the south, was closed, stranding thousands of motorists.

By late afternoon, rockets were falling in the vicinity of Bilal bin Rabah mosque, the scene of a deadly clash last week between Assir’s supporters and members of the Resistance Brigades, a pro-Hezbollah group. The Army had deployed heavily to end that round of fighting, setting up outposts around Abra.

In a strongly worded announcement , the Army said it would respond with an iron fist to any further aggression against the military.

“The Army will not remain silent to what it has suffered militarily and politically and will continue its mission to crack down on strife in Sidon and other parts [of the country] and strike with a iron fist whoever thinks of shedding the blood of the Army and will respond to all those who protect them politically and at the media level,” it said.

The Army also warned officials in Sidon to express clealy their position on the dangerous events.

“The leadership of the Army refuses duplicitous language and points out that the religious, spiritual leaders and lawmakers of Sidon are invited today to express frankly their stance: either to stand next the Lebanese Army to protect civilians … and prevent [an explosion] or to stand beside the provokers of strife and killers of soldiers,” the army said .

According to a statement from his office, Suleiman said calls for soldiers to desert and to ‘wage a jihad’ against the military only served “Lebanon’s enemies” and would go on the deaf ears of the Lebanese, Palestinians and soldiers as the “Army has the trust and support of the people … as well as the complete political cover in order for it to crack down on those endangering the security of citizens and soldiers.”

Suleiman, who followed up the situation in Sidon with Army commander Gen. Jean Kahwagi and caretaker Interior Minister Marwan Charbel, called for a meeting of ministers and security officials to be held at Baabda Palace on Monday.

Hundreds of Hezbollah fighters were reportedly killed in Syria, while fighting alongside the forces loyal to the embtatled president Bashar al Assad against the rebels, who are seeking to topple his regime. Hezbollah’s role in Syria has been criticized by all the leaders of the Arab states and the Sunni communities in these states.

On Thursday Suleiman urged Hezbollah to pull out its guerrillas from Syria, sstressing that any further involvement in its neighbor’s civil war would fuel instability in Lebanon, such as the one we witnessed today.

Hezbollah gunmen spearheaded the recapture of the strategic border town of Qusair two weeks ago aided by forces loyal to Syrian President Bashar al-Assad, who now appear to be preparing for an offensive in the northern city of Aleppo.

“If they take part in a battle for Aleppo, and more Hezbollah fighters are killed, it will lead to more tension,” Suleiman told the Lebanese newspaper As-Safir in an interview published on Thursday. “This should end in Qusair, and (Hezbollah) should return home.” He said.

Hezbollah’s intervention in Syria against the mainly Sunni Muslim rebels has further inflamed sectarian rivalry in Lebanon, where fighting between Alawite pro-Assad and Sunni Muslim anti-Assad gunmen in the northern city of Tripoli has killed dozens.

Hezbollah which was set up with Iranian support to fight Israeli occupation forces in southern Lebanon 30 years ago, is the only faction which kept its weapons after Lebanon’s 1975-1990 civil war, saying they were to protect Lebanese from Israeli forces.

After Israeli air raids on targets near Damascus last month, Nasrallah said Hezbollah would support any efforts by Syrian authorities to encourage militant attacks on the Israeli-occupied Golan Heights, seized from Syria in the 1967 war.

“From the start I told them I do not accept such behavior and I am against going to the Golan because this exposes (Hezbollah) and Lebanon to the Israeli enemy,” Suleiman said.

He also voiced concern about Lebanese Sunni fighters who have crossed into Syria to join rebels trying to topple Assad.

“When I spoke with President Barack Obama recently and he said he was worried by Hezbollah’s intervention in Syria, I said immediately: ‘We’re also worried by the intervention of all Lebanese factions in Syria’.”

Lebanon’s former PM and current Future Movement leader MP Saad Hariri warned against any attempt to lure the southern city of Sidon into a confrontation with the Lebanese Army.

Hariri also stressed the “necessity to take all measures to protect the city and its people and stop the ambulant discord threatening Lebanon.”

He waned  that “the major sin, which Hezbollah is responsible for by provoking Sidon’s residents and through spreading security outposts in its neighborhoods, should not be a pretext to break the law or to use weapons against the checkpoints of the Lebanese Army or any other legitimate security force.”

Hariri called on all citizens not to be “dragged into any negative reactions that would provide cover for the acts committed by Hezbollah, and give those harmed by the extension of the parliament’s mandate the chance to achieve their political and security goals.”

He also called for “concerted efforts in order to protect stability and coexistence, which will only be achieved through the state and its institutions, in particular the Lebanese army.”

Hariri expressed his “deepest condolences to the families of the victims who pay every day exorbitant prices due to the proliferation of illegal weapons and the logic of intimidating the state.”