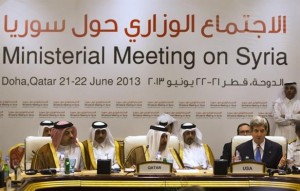 DOHA: World powers supporting Syria’s rebels decided on Saturday to take “secret steps” to change the balance on the battlefield, after the United States and others called for stepping up military aid to insurgents.

Yet even as they prepared to step up their own involvement in the war, they demanded that Iran and Lebanese Hezbollah stop supporting President Bashar al-Assad’s regime.

In their final communique, the ministers agreed to “provide urgently all the necessary materiel and equipment to the opposition on the ground, each country in its own way in order to enable them to counter brutal attacks by the regime and its allies and protect the Syrian people”.

Speaking in Doha, top Qatari diplomat Sheikh Hamad bin Jassem al-Thani said the meeting of foreign ministers of the “Friends of Syria” had taken “secret decisions about practical measures to change the situation on the ground in Syria”.

Washington and Doha called for increasing military aid to end what US Secretary of State John Kerry called an “imbalance” in Assad’s favour.

Kerry said the United States remained committed to a peace plan that includes a conference in Geneva and a transitional government picked both by Assad and the opposition.

But he said the rebels need more support “for the purpose of being able to get to Geneva and to be able to address the imbalance on the ground”.

To that end, he said, “the United States and other countries here in their various ways, each choosing its own approach will increase the scope and scale of assistance to the political and military opposition”.

Sheikh Hamad echoed Kerry’s remarks, calling for arms deliveries to the rebels to create a military balance that could help forge peace.

A peaceful end “cannot be reached unless a balance on the ground is achieved, in order to force the regime to sit down to talks,” he told the ministers.

“Getting arms and using them could be the only way to achieve peace.” British Foreign Secretary William Hague said London had taken “no decision” to arm the rebels.

On Thursday, the rebel Free Syrian Army (FSA) said it was already receiving unspecified new types of arms that could change the course of the battle, but also said it needed anti-aircraft and anti-tank weapons.

Meanwhile, French Foreign Minister Laurent Fabius said the ministers demanded that predominantly Shiite Iran and Hezbollah stop meddling in the war by supporting Assad, whose Alawite sect is an offshoot of Shiite Islam.

“We have demanded that Iran and Hezbollah end their intervention in the conflict,” said Fabius.

“Hezbollah has played a terribly negative role, mainly in the attack on Qusayr,” a strategic town recaptured from rebels earlier this month with the group’s help.

“We are fully against the internationalisation of the conflict,” he told reporters.

Kerry also accused Assad of an “internationalisation” of the conflict, which has claimed nearly 100,000 lives, by bringing in Iran and Hezbollah.

Sheikh Hamad also voiced support for a peace conference but insisted there could be no role in the future government for “Assad and aides with bloodstained hands”.

And he accused Assad’s regime of wanting to block the Geneva conference in order to stay in power, “even if that costs one million dead, millions of displaced and refugees, and the destruction of Syria and its partition”.

On the ground, loyalist forces pressed a fierce four-day assault on rebel-held parts of Damascus, while insurgents launched a new attack on regime-controlled neighbourhoods of second city Aleppo.

Government forces were attempting to storm the capital’s northeastern district of Qaboon, the Syrian Observatory for Human Rights said, with overnight mortar fire killing three children from the same family.

Battles also raged in the Barzeh, Al-Hajar al-Aswad and Jubar districts of the capital.

In Aleppo, large swathes of which are under rebel control, the FSA command announced the launch of “a battle to liberate several western districts

Saturday’s developments come as the military pushed on with its bid to end the insurgency in and around Homs in central Syria, said the Observatory.

They also come a day after at least 100 people were killed nationwide, it added.