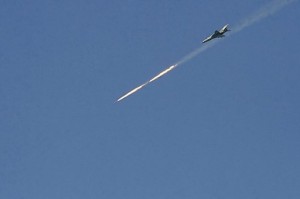 A salvo of 12 rockets fired from Syrian territories crashed into northern Lebanon on Saturday causing some damage, the official National News Agency (NNA) said.
The rockets crashed close to houses in the village of Al-Debabiah, the NAA said, indicating natives of the village urged the Lebanese Army to help some residents, fearing of being hit with shrapnel, flee to a safer place.

Lebanese villages and towns straddling the Syrian-Lebanese border have often been hit with shells and rockets from the Syrian side of the frontiers.

President Michel Suleiman has protested these violations of national territories to the United Nations and the Arab League. Several people have been killed and wounded in such incidents.

Meanwhile, the United Nations High Commissioner for Refugees said in its weekly report that the number of registered Syrian Refugees in Lebanon reached up to 553, 600. The report pointed at difficulties in securing aid to the fleeing Syrians due to volatile security and other hardships. Caretaker Lebanese PM Nagib Mikati disclosed yesterday that in addition to the registered Syrian refugees there are an addition 750, 000 Syrians in Lebnaon, a tiny country of 4 million people