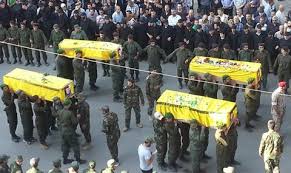 The Palestinian militant group Hamas on Monday urged Lebanon’s Hezbollah militia to withdraw its fighters from Syria and accused it of stoking sectarian tensions, leveling unprecedented public criticism against a former ally.

The Hamas statement came as the region’s Sunni and Shiite Muslims are lining up on opposite sides of Syria’s civil war. Most of those trying to topple Syrian President Bashar Assad are Sunnis, as are their regional backers. Assad and key members of his regime are Alawites, followers of an offshoot of Shiite Islam, and he is being supported by Shiite Iran, also the main backer of Hezbollah.

Last month, Hezbollah sharply raised its profile in the fighting in Syria, playing a key role in the Assad regime’s capture of the strategic rebel-held town of Qusair. Many Sunni hard-liners have taken Hezbollah’s intervention as a declaration of war by Shiites, and some have urged Sunnis to fight alongside the rebels.

Hamas, a Sunni movement, on Monday criticized Hezbollah over its growing role in the Syria conflict. In a statement, Hamas called on Hezbollah to “withdraw its forces from Syria and keep its weapons directed at the Zionist enemy (Israel).” Hamas also said that sending forces to Syria “contributed to the sectarian polarization in the region.”

Hamas and Hezbollah used to be part of the self-proclaimed Iranian and Syrian-led “axis of resistance” against Israel. Hamas leaders in exile were based in Syria, and both Hamas and Hezbollah received funds and weapons from Iran.

Hamas leaders left Syria last year to protest Assad’s crackdown on fellow Sunnis. Since then, Hamas has drifted away from Iran and moved closer to the region’s Sunni camp led by Saudi Arabia and Qatar, though it has not formally cut ties with Tehran.

Hamas and Hezbollah played important roles in Iran’s attempt to set up heavily armed proxies on opposite sides of Israel — Hamas in the Gaza Strip and Hezbollah in southern Lebanon.

Two decades ago, when Israel deported hundreds of Islamic militants from the West Bank and the Gaza Strip to south Lebanon for a year, leaders of Hamas had a chance to meet face-to-face with Hezbollah leaders. The office of the Hamas representative in Lebanon is located in a heavily guarded Hezbollah stronghold in southern Beirut. Hamas officials have said Hezbollah has shared its military experience with their group.

Two Hamas officials in Gaza said Monday’s statement is a result of growing outrage within Hamas over Hezbollah’s involvement in Syria. The officials spoke on condition of anonymity, saying they did not want to pre-empt the movement’s top leaders who have been meeting in Cairo since Sunday.

On Saturday, the Hamas representative in Lebanon, Ali Barakeh, met with a member of the Hezbollah political bureau, Hassan Hubballah.

Hezbollah said in a statement that the two discussed “the existential challenges facing the Muslim and Arab world today, particularly the war on Syria,” but it did not elaborate.