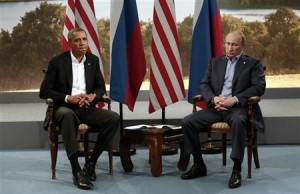 U.S. President Barack Obama sparred with Russia’s Vladimir Putin over how to end the war in Syria on Monday during an icy encounter at a G8 summit where divisions over the conflict eclipsed the rest of the agenda.

Speaking after talks with Obama, Putin said Moscow and Washington had differing views over Syria but agreed the bloodshed must stop and that the warring parties should be brought to the negotiating table.

Both leaders looked tense and uncomfortable as they addressed reporters after about two hours of talks, with Putin staring mostly at the floor as he spoke about Syria and Obama only glancing occasionally at the Russian leader.

“Our positions do not fully coincide, but we are united by the common intention to end the violence, to stop the number of victims increasing in Syria, to resolve the problems by peaceful means, including the Geneva talks,” Putin said.

“We agreed to push the process of peace talks and encourage the parties to sit down at the negotiation table, organize the talks in Geneva.”

Obama tried to lighten the mood at the end of their talks by discussing judo but Putin, a black belt in the martial art, replied that the then-smiling U.S. president was simply trying to get him to relax.

Divisions over Syria dominated the atmosphere as global leaders met in the remote golf resort in Northern Ireland, a place once rocked by decades of violence but which Britain now wants to showcase as a model of conflict resolution.

Western leaders have rebuked Putin’s staunch support for Syria’s Bashar al-Assad and his attempt to crush a two-year-old uprising in which at least 93,000 people have been killed.

Speaking alongside Putin after their first face-to-face meeting in a year, Obama said the two men had different views on Syria but shared an interest in stopping violence and ensuring chemical weapons were not used.

“With respect to Syria, we do have differing perspectives on the problem but we share an interest in reducing the violence and securing chemical weapons and ensuring that they’re neither used nor are they subject to proliferation,” Obama said.

He said the two leaders had instructed their teams to work on a peace conference about Syria in Geneva.

On Iran, Obama added that he and Putin expressed cautious optimism about the ability to move forward on a dialogue with Iran after a moderate cleric was elected president there.

Stung by recent victories for Assad’s forces and their support from Hezbollah guerrillas, the United States said last week it would step up military aid to the rebels including automatic weapons, light mortars and rocket-propelled grenades.

Earlier British Prime Minister David Cameron, who is chairing the G8 summit in a remote golf resort in Northern Ireland, also conceded there was “a big difference” between the positions ofRussia and the West on how to resolve the war.

In some of his most colorful remarks on Syria, Putin described anti-Assad rebels as cannibals who ate human flesh on the eve of the summit and warned of the dangers of giving guns to such people.

For their part, Western leaders have criticized Russia, Syria’s most powerful ally, for sending weapons to Assad forces and considering deliveries of a sophisticated missile system.

“How can we allow that Russia continues to deliver arms to the Bashar al-Assad regime when the opposition receives very few and is being massacred?” French President Francois Hollande said.

In an apparent response to the U.S. plan, Assad said Europe would “pay the price” if it delivered arms to rebel forces, saying that would result in the export of terrorism to Europe.

“Terrorists will gain experience in combat and return with extremist ideologies,” he said in an advance extract of an interview due to be published in the Frankfurter Allgemeine Zeitung on Tuesday.