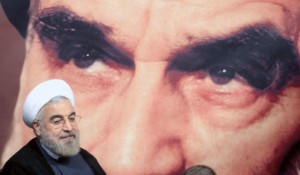 The White House said such engagement would be aimed at reaching a “diplomatic solution that will fully address the international community’s concerns about Iran’s nuclear program,” AFP news agency reported.

But the White House criticized Iran’s censorship of the media and the internet during the vote, along with an “intimidating security environment that limited freedom of expression and assembly.”

64-year-old Rowhani has previously vowed to restore diplomatic ties with the U.S., which cut relations in the aftermath of the 1979 seizure of the U.S. embassy by Islamist students.

Meanwhile, EU foreign policy chief Catherine Ashton said she was committed to working with Rowhani to find a “swift diplomatic solution” to the disputed nuclear program.

U.N. Secretary-General Ban Ki-moon urged Iran to play a “constructive role” in regional and international affairs, his office said in a message congratulating Rowhani and welcoming the reported high turnout.

French Foreign Minister Laurent Fabius said Paris was “ready to work” with Rowhani, and said the country’s nuclear program and its involvement in the Syrian conflict would be high on the agenda.

Britain urged Rowhani to set the Islamic republic “on a different course,” while German Foreign Minister Guido Westerwelle welcomed Rowhani’s election as a vote for reforms and “a constructive foreign policy.”

Italian Foreign Minister Emma Bonino said Italy hoped to launch a “relationship of renewed comprehension and constructive dialogue” with Iran after the election of its new president.

But Israel said it was supreme leader Ayatollah Ali Khamenei who determines nuclear policy, not the president.

“After the election, Iran will continue to be judged by its acts, in the nuclear field as well as that of terrorism,” a foreign ministry statement said.

The Jewish state, the region’s sole if undeclared nuclear power, has not ruled out a military strike to prevent Iran developing an atomic bomb.

At home, the supreme leader hailed Rowhani on his victory.

“Congratulations to the people and to president-elect Hojatoleslam Hassan Rowhani,” Khamenei’s website reported.

“I urge everyone to help the president-elect and his colleagues in the government, as he is the president of the whole nation.”

He has been an outspoken critic of outgoing President Ahmadinejad, accusing him of needlessly antagonizing the international community.

Rowhani scored a landslide victory over his conservative rivals without the need of a second round run-off, Interior Minister Mostafa Mohammad-Najjar said on state television on Saturday.

Najjar said 72 percent of the 50 million eligible voters had turned out to vote, and that Rowhani had secured 18.6 million votes, just over the 50.71 percent of the vote needed to avoid a run-off.

Here are the final results of the Iranian elections as calculated by Reuters from the total number of votes cast and rounded.