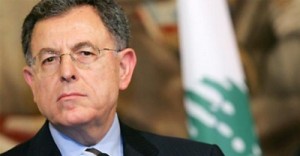 “Hezbollah is not only gambling with its own future but with the interests and livelihood of all the Lebanese people,” Siniora’s press office quoted him as saying.

The Future bloc leader also said that Hezbollah’s involvement in Syria caused it a crushing defeat.

“Hezbollah entered Syria to kill the Syrians and achieve illusionary victories, but what is happening is a crushing defeat for it,” Siniora said.

Siniora called on Hezbollah to withdraw from Syria and “stop killing the Syrian people.”

The bloc leader also called for containing the anger of the Arab world caused by Hezbollah’s fighting against Syrian rebels.

“[Hezbollah] must contain the great anger of the Arab world to protect itself, its compatriots and the great number of Lebanese expatriates in these countries,” Siniora said.

Hezbollah fighters have been battling alongside the Syrian army for months.