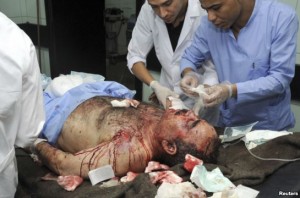 Two suicide bombers targeted a police station Tuesday in Damascus, activists said, killing at least 14 people and showing the ability of insurgents to strike in the heart of the capital after rebels fighting to oust the regime suffered major battlefield setbacks elsewhere in the country.

The blasts — which occurred in central Marjeh Square near the Interior Ministry — were the first such attacks to target President Bashar Assad’s seat of power since the regime chased rebels from the strategic town of Qusair nearly a week ago.

Backed by fighters the Lebanese militant group Hezbollah, President Bashar Assad’s army is trying to build on its victory in Qusair to clear rebel-held areas in the center of Syria, a linchpin area linking Damascus with regime strongholds on the Mediterranean coast. Syrian state-run media and the Hezbollah-owned Al-Manar TV have said Syrian forces are preparing an offensive reportedly named Operation Northern Storm to recapture the northern city of Aleppo. The regime also is believed to be advancing on rebel-held areas in the center of Homs.

The regime’s rapid military advance has raised alarms in Washington, prompting the Obama administration to begin discussing whether to approve lethal aid for the beleaguered rebels. Officials said a decision could happen later this week. The president and his advisers also will weigh the merits of a less likely move to send in U.S. airpower to enforce a no-fly zone over the civil war-wracked nation, officials said.

While nothing has been concretely decided, U.S. officials said Obama was leaning closer toward signing off on sending weapons to vetted, moderate rebel units. The U.S. so far has hesitated to do that because it doesn’t want groups that are linked to al-Qaida and other extremists fighting alongside the anti-Assad militias to end up with the weapons.

Such an intervention would drastically raise the stakes in the conflict, which began in March 2011 as protests inspired by the Arab Spring but morphed into a full-blown civil war that has ignited sectarian tensions in the region. Assad enjoys support from many in his Alawite sect, an offshoot of Shiite Islam, while the rebels are mainly Sunnis. The U.N. says more than 80,000 people have been killed in the conflict.

Nobody claimed responsibility for Tuesday’s blasts, but past suicide attacks and strikes on security installations have been claimed by the al-Qaida linked Jabhat al-Nusra group. The style of attacks also is a tactic commonly used by al-Qaida and other Sunni extremists.

Syrian state TV quoted a security official as saying two “terrorist” suicide bombers struck in quick succession near a police station in the bustling Marjeh Square. He said 14 people were killed and 31 were wounded.

Shop facades were broken and blood was splattered on the pavements and inside stores. Paramedics carried the wounded on stretchers to ambulances, walking past cars that were mangled in the blasts.

In other violence, the Observatory reported clashes between rebels and regime forces in the rebel-held neighborhood of Dar-al-Sayah in Homs city, resulting in casualties among the opposition fighters. The group also reported fighting in Aleppo early Tuesday in what appeared to be a regime attempt to storm two neighborhoods held by the opposition.

Activists in Aleppo and Homs have claimed that Hezbollah fighters have joined the military operations in the two cities.

The Observatory also said fighting was reported in the southern Daraa province around a village that has been contested between the two sides for the past few days.

The conflict has already spilled over into neighboring countries, such as Lebanon, Turkey and Israel.

On Tuesday, a Lebanese security official said six rockets landed in Hermel in northeastern Lebanon, wounding four residents. Syrian rebels, who have threatened to punish Hebzollah for its support of Assad, have fired dozens of rockets on the town, which is across the border from Qusair.

The security official said the rockets started a fire in a neighborhood in the area, damaging a resident’s home. Clouds of smoke were seen rising from the residential area. The official spoke on condition of anonymity in line with regulations.

Gunmen from rival religious sects in Lebanon have fought on opposite sides of the conflict. Lebanese Sunnis mostly back the opposition while many Shiites in Lebanon support Assad.

Photo: This SANA photo shows medics helping a man who was wounded when bombs exploded in al-Marjeh Square in Damascus, June 11, 2013.