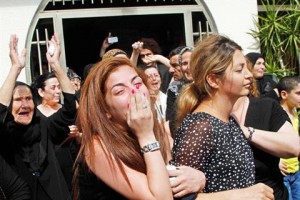 Hashem Salman, 28, the leader of the student section of the Lebanese Option party who was shot and killed at a rally outside the Iranian Embassy in Beirut on Sunday while protesting against Hezbollah’s involvement in the Syrian conflict, was laid to rest Monday in his hometown of Adloun in south Lebanon. His death continued to generate condemnations

Salman’s relatives who live abroad in Europe and the U.S. traveled to Lebanon to attend the funeral. Dina – Salman’s mourning sister – fainted several times standing next to his coffin crying, according to reports

“My brother is a hero,” she hollered as some of his family members and friends fired shots in the air. “My brother was betrayed.”

President Michel Suleiman called on Hezbollah and the Iranian Embassy Monday to assist in the investigation into Salam’s death, while politicians condemned the killing and protest attack that took place outside Tehran’s mission in Beirut.

“Suleiman stressed the need for citizens and parties in the area, particularly Hezbollah and the Iranian Embassy, to assist the competent agencies in their mission to uncover the details and circumstances [surrounding the crime],” said a statement from Sleiman’s office.

According to the statement, Suleiman also met with Iranian Ambassador Ghazanfar Roknabadi and discussed the incident that led to Salman’s death.

A small group of protesters from the Lebanese Option Party which is headed by Shiite politician Ahmad al-Asaad, were attacked by Hezbollah supporters with sticks and guns when they arrived outside the embassy in Beirut for a scheduled protest.

The Hezbollah supporters , who were wearing black with yellow armbands beat and shot at the protesters almost immediately after they got off a bus in Beirut’s southern suburb.

Several other protesters were wounded in the attack.

A statement issued from Hariri’s office said the denunciation came in a telephone call to Asaad, whose party is a staunch critic of Hezbollah.

Hariri “condemned the attack, which was organized by entities affiliated with Hezbollah near the Iranian embassy yesterday [Sunday],” the statement said.

The head of the Future Movement stressed that the Lebanese oppose the “methods of intimidation against opinion-makers.”

“The Lebanese will certainly not accept an Iranian style whereby Hezbollah areas become security protectorates,” Hariri told Asaad, according to the statement.

“What happened around the Iranian Embassy and led to the killing of one of the protesters is denounced,” the PSP chief said in his weekly comments published on the Al-Anbaa website. “Apart from the barbaric way the attack occurred through the use of sticks and batons as done in centuries past, it raises big questions about the aims and goals [of the attack].”

“The political divisions between the Lebanese, no matter how deep they get … cannot abolish the right to political diversity and freedom of expression,” he said.

Jumblatt also accused the Iranian Revolutionary Guard or their allies of being behind the attack.

“We ask that investigations into the killing of Hashem Salman be completed after he was beaten up by unidentified assailants who are, however, very well known [of being] either members of the Iranian Revolutionary Guard or one of their satellites,” he said.

The Phalange Party also condemned on Monday the killing of Hashem Salman and called for an end to the of violence in the country.

“The pre-planned assassination of a leading member of the Lebanese Option party is a criminal aggression that targets free political expression… and allows killing as a legitimate means to silence opposing stances,” the statement issued by the Kataeb party read.

The statement also called on the competent authorities to arrest and punish the assailant, “who is identified [with] audiovisual [evidence].”

In an interview with An-Nahar newspaper , Lebanese Forces leader Samir Geagea also condemned the death of Hashem Salman and blamed Hezbollah over the incident.

“I extend my warm condolences to the family of martyr Salman, and I would like to say that this is the price of freedom in Lebanon,” Geagea said.

“This is Hezbollah’s actual nature and this is the violent society it is calling for, and I would like to call on the Free Patriotic Movement to realize which party it is allies with,” he said.

Hezbollah and AMAL Movement refused to allow the burial of Hesham Salman in his hometown’s cemetery in Adloun, MTV reported on Monday

“Both parties rejected burying Salman in Aldoun’s cemetery or allowing his family to receive condolences in the local husseiniya,” MTV reported.

The same MTV sources noted, however, that the family of Lebanese Option Party leader Ahmed Asaad has offered Salman’s family a piece of land to bury their son.

Photo: Relatives mourn the death of Hashem Salman, 28, the leader of the student section of the Lebanese Option party who was shot and killed at a rally outside the Iranian Embassy in Beirut on Sunday while protesting against Hezbollah’s involvement in the Syrian conflict