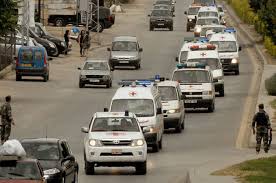 Dozens of wounded Syrians from the city of Qusayr that was recently seized by government forces with Hezbollah’s help have arrived in Lebanon for treatment.

Lebanese Red Cross ambulances, accompanied by cars of the International Committee of the Red Cross (ICRC), were rushed to the Chtaura Hospital in eastern Lebanon under heavy security by the Lebanese army on Saturday.

Al Jazeera has been told 60 Syrian and Lebanese men were handed to the ICRC after being evacuated from the strategic border city, which the Syrian military, backed by Hezbollah fighters, recaptured from rebels on Wednesday after two weeks of fierce fighting.

The Red Cross said it hoped to eventually bring 800 people to safety after it reached a deal with the Syrian government to evacuate wounded civilians from Qusayr.

Samar al-Kadi, the ICRC spokeswoman in Beirut, said that the ICRC with the Lebanese Red Cross had transferred 37 wounded people from Qusayr to Lebanese hospitals since Friday.

“The ICRC and the Lebanese Red Cross will continue to ensure that the wounded who arrived in Lebanon receive medical assistance they need,” she told DPA news agency.

Kadi did not specify if they were rebels or civilians, but a security official told AFP news agency rebels including about 10 Lebanese Sunnis who had crossed to Syria to join the fighting were among those being treated.

“Some 30 wounded fighters are being treated in hospitals in the Baalbek area” of eastern Lebanon, the security official said on condition of anonymity.

He said “dozens of wounded rebels” had arrived in Arsal in northern Lebanon, awaiting treatment.

A Red Cross volunteer said 19 more wounded people were on their way to Chtaura, 44 kilometres from the capital Beirut.

A Lebanese border guard said that about 300 wounded Syrians, mostly in serious condition, had arrived in the eastern Lebanese town of Arsaal.

Another security official in northern Lebanon told AFP that 10 Lebanese Sunnis from the port city of Tripoli had been brought back for treatment.

“We are expecting more to arrive,” the official said.

A government source, who requested anonymity, said that leading Lebanese politician Walid Jumblatt used his ties with Hezbollah and secured the transfer of the injured from Qusayr.

Syrian state news agency SANA reported that the military had seized the last opposition stronghold in the region of al-Qusayr, in the village of Eastern Bweida.

The Syrian Observatory for Human Rights, a London-based watchdog group, said government forces had advanced into Eastern Bweida after heavy clashes with rebels.

“The Observatory is concerned about the fate of hundreds of the injured inside Eastern Bweida,” it said.

The rebels reportedly used Qusayr as a supply route from Lebanon.
Al Jazeera

Update: The Office of displaced Syrians told al Arabiya that 25 Lebanese and Syrian people were kidnaped between the al Labwa and Baalbek. Al Arabiya also reported that some of the wounded that were transported from Qusayr, Syria for treatment in Tripoli, Lebanon were abducted near Baalbek on their way for treatment.
Another report said the Red Cross convoy of wounded Syrians was subjected to attacks between the al Labwa and Baalbek; stones were reportedly tossed at the convoy by unknown assailants .