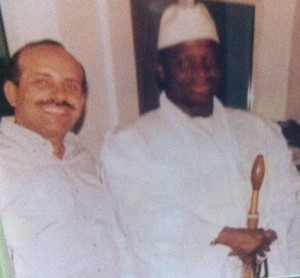 The Gambia on Friday banned imports of frozen chicken legs after expelling one of the country’s most powerful business magnates for stocking groceries months past their sell-by date.

Lebanese-Gambian multi-millionaire Hussein Tajudeen, a former close friend of President Yahya Jammeh, was kicked out of the country this week for “engaging in undesirable business activities”.

Tajudeen, who owns a chain of outlets including Gambia’s largest supermarket, “was engaged in selling expired food stuffs, most of which have been in his stores for the past seven months,” a government investigator told AFP.

“After a careful review and consideration of trade and health- related issues, the ministries of trade and health inform the general public and all importers of frozen foodstuffs that the government has decided to ban the importation of frozen chicken legs into the country with immediate effect,” a Gambian government statement said.

The affair has sent shockwaves through the business community in mainland Africa’s smallest nation, where retailers and the impoverished public rely on cheap imported goods to keep shopping bills down.

Tajudeen, scion of the nationwide Kairaba supermarket chain and a Gambian resident for 15 years, was also the country’s main importer of rice and flour as owner of the parent company, Tajco.

It was not immediately clear what would happen to Tajco’s Gambian interests in his absence.

The government did not officially link Tajudeen’s deportation and the import ban but a presidential source told AFP: “The move to ban the importation of chicken was a reaction to Tajudeen’s way of doing business.”

Tajudeen, who owns businesses worth several million dollars in the Gambia and Lebanon, was ordered to leave within 72 hours on Tuesday and is understood to have complied.

A government statement said his “undesirable business activities” had “very serious health and economic consequences to the people and the state”.

“Despite the fact that the Gambia has a liberal economy, the state will not condone greedy and unscrupulous businessmen who are just after their profit margin and not the welfare and well-being of the consumers,” the government said.

The Kairaba chain and its Banjul-based parent company Tajco were reportedly placed under US sanctions in December 2010 for allegedly forming part of a multinational network that investigators said generated millions of dollars for the Lebanese movement Hezbollah, designated by the United States as “among the most dangerous terrorist groups in the world”.

The sanctions targeted a network of businesses owned or controlled by Tajudeen and his brothers in the Gambia, Lebanon, Sierra Leone, the Democratic Republic of Congo, and the British Virgin Islands.