Golan:Putin wants the Russians to replace the Austrians 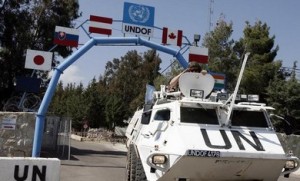 Russian President Vladimir Putin proposed Friday that Russian peacekeepers replace departing Austrian troops monitoring the Israeli-Syrian ceasefire line in the Golan Heights that has been the scene of an upsurge in fighting in recent days.

“Considering the difficult situation that is developing today in the Golan Heights, we could replace the departing Austrian contingent in this region separating Israeli forces from the Syrian army,” Putin, a close ally of the Syrian regime of President Bashar al Assad was quoted by Russian news agencies as saying.

The Kremlin chief stressed that this was only a proposal and that a formal request had to come from the United Nations and be agreed with both Israel and Syria.

“Of course (this will happen) only if the regional powers express an interest in this, if the UN secretary general asks us about this,” said Putin.

The Russian leader added that he had recently received a request for Moscow’s broader participation in UN peacekeeping missions during a meeting with UN Secretary General Ban Ki-moon.

The UN force in the Golan Heights was thrown into disarray Thursday after Austria withdrew its troops and two peacekeepers were injured as Syrian government and rebel fighters battled for a border crossing.

UN leaders held emergency talks on Thursday to replace the 377 Austrians who make up more than a third of the United Nations Disengagement Observer Force (UNDOF) that has monitored the ceasefire between Israel and Syria since 1974.

Austria, the cornerstone of UNDOF for many years, said the threat to its soldiers had “reached an unacceptable level”.