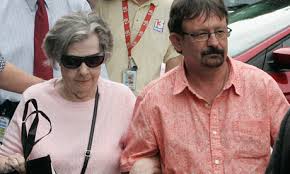 An 84-year-old Florida widow who bought her Powerball ticket after another customer let her get ahead in line came forward Wednesday to claim the biggest undivided lottery jackpot in history: $590 million.

Gloria C. MacKenzie, a retiree from Maine and a mother of four who lives in a modest, tin-roof house in Zephyrhills, where the lone winning ticket in the May 18 drawing was sold, took her prize in a lump sum of just over $370 million. After federal taxes, she is getting about $278 million, lottery officials said.

She did not speak to a crowd of reporters outside lottery headquarters, leaving quickly in a silver Ford Focus with her son and family friends. She was accompanied at the lottery offices by two unidentified attorneys.

MacKenzie bought the winning ticket at a Publix supermarket in the town of about 13,300, which is 30 miles northeast of Tampa. It is best known for the bottled spring water that bears its name – and now, for one of the biggest lottery winners of all time.

The $590 million was the second-largest lottery jackpot in history, behind a $656 million Mega Millions prize in March 2012, but that sum was split, with three winning tickets.

In a statement read by lottery officials, MacKenzie said she purchased the ticket after another buyer “was kind enough to let me go ahead in line.” MacKenzie let the lottery computers generate the numbers at random. She said she also bought four other tickets for the drawing.

“We are grateful with this blessing of winning the Florida Lottery Powerball jackpot,” the statement said. “We hope that everyone would give us the opportunity to maintain our privacy for our family’s benefit.”

The winner had 60 days to claim the prize. Lottery spokesman David Bishop said MacKenzie, her lawyers and her financial adviser spent about two hours going through the necessary paperwork.

“They had clearly been preparing for this. They took all this time to get everything in order,” Bishop said.

Minutes after the announcement, a dozen reporters in Zephyrhills were camped outside MacKenzie’s gray duplex, which backs up to a dirt alley and is across from a cow pasture.

Neighbors were surprised by her good fortune.

“She didn’t say anything about it. She’s so quiet and secluded. She’s usually in the house,” James Hill said. “I’m very happy for her. It couldn’t have happened to a nicer person. She was always pleasant and smiling.”

Another neighbor, Don Cecil, joked, “I hope she gets a better place to live.”

MacKenzie’s neighbors offered few details about her life. They said she mostly kept to herself, but they’ve seen her take short walks along the street and exchanged pleasantries with her.

Her house, situated among mostly mobile homes and prefabricated houses, has a chain-link fence with a sheet-metal roof and an old TV antenna.

MacKenzie retired to Zephyrhills more than a decade ago from rural Maine with her husband, Ralph, who died in 2005.

Back in her hometown of East Millinocket, Maine, relatives and friends were surprised to hear of her good fortune.

Robert MacKenzie, Ralph’s brother, said the couple met just after World War II after Ralph got out of the Navy. He went to work in the town’s paper mill, laboring as a technician for almost four decades.

Robert MacKenzie said he didn’t know his sister-in-law had won until a reporter called him.

“Holy mackerel,” he said when told of her winnings. He added: “It hasn’t soaked in, but I’m happy for her. That would be great because she’s a widow and she can have a nice home now.”