Hezbollah celebrates the fall of Qusair 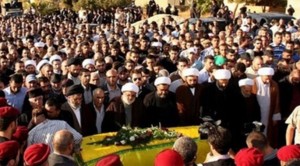 Hezbollah supporters in the Beirut’s Shia suburb of Dahieh are reported to be celebrating the fall of Qusair.

The Guardian’s Martin Chulov in Beirut explains the background to Hezbollah’s role in the battle for Qusair.

Hezbollah’s role as a spearhead against a Sunni insurgency in an Arab land has meant a rethink of the group’s raison d’etre and has unambiguously wedded it to the fortunes of the Assad regime, whose military had been unable to gain ground in numerous battles across the country until the increased role of Hezbollah and a militia of Shia fighters from Syria and elsewhere, known as Abu Fadl al-Abbas.

Iran, the main patron of both groups, released a statement on Wednesday morning “congratulating the Syrian people for their victory”.

In recent days Hezbollah had deployed hundreds of its elite forces to Qusair, a sign that the battle was drawing to a close despite resistance from rebels who had proved tougher than expected. The defence of the town was primarily led by homegrown fighters, among them defectors. However, reinforcements from Homs and Aleppo, as well as a contingent of around 200 from the al-Qaida-aligned Jabhat al-Nusra, arrived one week ago. The total number of fighters is thought to have been around 3,000 …

Buoyed by victory in Qusair, a broader role for Hezbollah is now thought to be on the agenda. Unconfirmed reports in recent days have suggested that the group will now be moved to Aleppo in similarly large numbers, where it will attempt to dislodge rebel groups who have controlled 60% of Syria’s largest city for the past 10 months.

The fall of Qusair doesn’t change the strategic stalemate in Syria, according to Michael Hanna senior fellow at Century Foundation thinktank.

Speaking to the Guardian, he said:

It is obviously a big blow, not just tactically but psychologically, for the rebels. But we have seen these tactical ebbs and flows before … People have made far-reaching conclusions that have assumed that these temporary shifts in momentum signify the beginning of the end for either side. I think that is simply premature.

There are still huge swaths of Syrian territory that, I think, are permanently out of control of central government. There are places in the country that are never going to be reclaimed. So I think it’s hard to think of a scenario whereby we can talk about Assad winning. These limitations are going to carry on into the foreseeable future.

It’s hard to see how this becomes a model for reclaiming control of the entire country.

Asked about Hezbollah’s role in the battle, Hanna said:

Clearly having Hezbollah engaged in an open and dedicated fashion, not only infused new numbers into the fight, but also well-trained and disciplined fighters. Obviously they did make a very big difference in Qusair, as has Iranian technical, logistical, and planning support.

Hanna was also pessimistic about possibility of a diplomatic breakthrough at the Geneva II conference.

We are at a strategic stalemate and this is something that could go on for years. I imagine there is going to be a political settlement to this war at some point, but I don’t think that is in the near term … There is not going to be any resolution or progress at Geneva, if the talks happen.

Not a turning point

The fall of Qusair is a serious blow to the rebels but not a turning point in the war, according to the FT’s David Gardner

In his instant take on the battle he writes:
It cements a stalemate that, until now, had been dynamic. The combined forces loyal to the Assads still cannot regain control of large, mostly rural swathes of Syria; while rebel forces are still too fragmented, ideologically divided and poorly armed to depose the regime. But Qusair shows how far the nature of regime forces has changed.
This appears to be the emerging consensus among analyst.

Photo: Funeral of one of the Hezbollah fighters killed in Syria