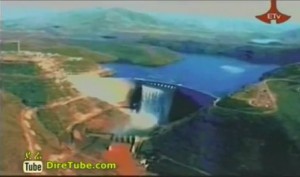 Egyptian officials tried to cool tensions with Ethiopia Wednesday over the new Nile River dam project by highlighting its “neighborliness” as the Ethiopian prime minister’s spokesman insisted that nothing would stop the dam from being completed upstream from Egypt, which is wholly dependent on Nile River water.

Egypt fears a diminished flow from Africa’s largest dam and hydropower station but Egyptian President Mohammed Morsi said Egypt respects Ethiopia and will not engage in any aggressive acts against the East African nation. Egyptian politicians had suggested the country should sabotage the project in a meeting with the president Monday.

Getachew Reda, a spokesman for Ethiopian Prime Minister Hailemariam Desalegn, said late Tuesday that Egyptian leaders in the past have unsuccessfully tried to destabilize Ethiopia.

Ethiopia a week ago started diverting the flow of the Nile toward the $4.2 billion hydroelectric plant dubbed the Grand Ethiopian Renaissance Dam. The project is about 20 percent complete.

“The Renaissance Dam is here to stay. It is advisable for all actors of the political establishment in Egypt to come to terms with this reality,” Getachew said in an interview.

Since Ethiopia announced it was going to build the dam in March 2011, it has insisted the water flow to Sudan and Egypt will not be affected. It has initiated a tripartite Egypt-Sudan-Ethiopia experts panel to study the impact of the dam.

The 10-man panel, which includes four international experts, submitted its report to the countries last weekend. Ethiopia’s Ministry of Water and Energy said the report concluded the dam “will not significantly affect” either Sudan or Egypt.

Egyptian political leaders on Monday met Morsi to discuss the report. Apparently unaware their discussion was being televised live, some of them proposed hostile acts including aiding rebels inside Ethiopia and destroying the dam itself. Ethiopian officials long have accused Egypt of backing anti-government rebels in Ethiopia. More than a dozen rebel groups exist in the East African nation, some wanting more autonomy, others a separate state.

“There are on the one hand people who still think that they can turn the clock back on Ethiopia’s development endeavors including of course the construction of the Renaissance Dam,” said Getachew. “Second you have people like President Mohammed Morsi, who according to the reports, said to have stressed that there is no point in trying to force Ethiopians, but the best solution would be to engage to Ethiopians.”

Experts estimate that already water-starved Egypt could lose as much as 20 percent of its water in the three to five years that it would take to fill the massive reservoir. Ethiopia diverted the course of the Blue Nile to make way for ongoing dam construction. The Blue Nile has its source in the Ethiopian mountains and is responsible for 85 percent of the water that reaches Egypt.

The live transmission of the politicians’ comments has kicked off an uproar in Egypt’s independent media, with many government critics saying that carrying the meeting live on TV has shown the extent of Morsi’s mismanagement of a national security issue.

Egypt’s top reform campaigner, Nobel Peace Laureate Mohamed ElBaradei, has called on Morsi on his Twitter account to apologize to Ethiopia and Sudan on behalf of the Egyptian people for what was said during the Monday meeting.

Morsi’s top political aide, Pakinam El-Sharkawy, has apologized on Twitter about not informing participants in advance that the meeting would be carried live.

“I apologize for the unintended embarrassment caused to any of the political leaders for not mentioning the live transmission of the meeting,” she wrote. El-Sharkawy moderated Monday’s meeting.

A Cabinet statement on Wednesday attempted damage control, saying Egypt was looking forward to cement relations with Ethiopia on the basis of “good neighborliness, mutual respect and the pursuit of joint interests without either party harming the other.”

The statement, which followed a Cabinet meeting, said Egypt recognized Ethiopia’s development needs and acknowledged Ethiopia’s repeated assurances that it would not harm Egypt’s water interests. Egypt, it added, wanted to quickly start a “political and technical” dialogue with Ethiopia.

Getachew said that Egypt’s president told Hailemariam on the margins of the African Union meeting late last month that Egypt will cooperate in the construction of the dam.

“If there are still people who still think they can do the kind of things which leaders in the past such as (Egyptian President Hosni) Mubarak were not able to successfully launch, then they are entitled to day dreaming,” said Getachew.

Getachew said the Ethiopian government has no intention of harming Egypt.

“We are not in the business of starving Egyptians to death. We are rather interested in the generation of hydro-electric power and there is nothing that will create any significant harm on the Egyptians as far the building of the dam is concerned,”Getachew said.

Ethiopia is currently spearheading a group of six nations that have signed a new Nile cooperation agreement opposed by Egypt and Sudan. The new agreement strips Egypt of its veto power over upstream countries’ projects on the Nile.