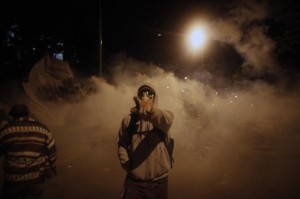 Activists on Wednesday presented a list of demands they said could end days of anti-government demonstrations that have engulfed Turkey, as police detained 25 people they accused of using social media to stoke the outpouring of anger.

In a move to defuse the tension, the deputy prime minister met with a group whose attempt to prevent authorities from ripping up trees in Istanbul’s landmark Taksim Square has snowballed into nationwide protests against what demonstrators see as Prime Minister Recep Tayyip Erdogan’s increasingly authoritarian rule.

Police have deployed water cannons and tear gas has clouded the country’s city centers. The Ankara-based Human Rights Association says close to 1,000 people have been injured and more than 3,300 people have been detained over five days of protests.

The activist group denounced Erdogan’s “vexing” style and urged the government to halt Taksim Square redevelopment plans, ban the use of tear gas by police, the immediate release of all detained protesters and the lifting of restrictions on freedom of expression and assembly.

It also demanded that officials — including governors and senior police officials — responsible for the violent crackdown be removed from office.

The protests appear to have developed spontaneously and remain leaderless. It was not at all certain that the tens of thousands of protesters would heed any call by the group to cease.

The group of academics, architects and environmentalists, known as the “Taksim Solidarity Platform,” was formed to protect Taksim Square from development, including the rebuilding of an Ottoman army barracks and a shopping mall. The protests were sparked by fury over a heavy-handed pre-dawn police raid Friday to roust activists camping out in an attempt to stop the plans.

Protests appeared to calm a bit on Wednesday, even as thousands of trade union members on a two-day strike marched to Taksim and to central Ankara.

Some demonstrations were largely jovial. In Ankara, protesters called themselves “looters.” A sign on a stall in Taksim providing free food and water read “Revolution Market.”

But there were scattered violent clashes overnight on roads leading to Erdogan’s offices in Ankara and Istanbul, as well as in the city of Antakya, near the Syrian border, where a protester was killed Wednesday from an apparent blow to the head.

Deputy Prime Minister Bulent Arinc, who is standing in for Erdogan while he is on a trip to Northern Africa, has offered an olive branch to protesters, apologizing for what he said was a “wrong and unjust” crackdown on the sit-in. Erdogan had inflamed protesters, calling them “looters” and extremists, and refusing to back away from plans to revamp Taksim.

“The steps the government takes from now on will define the course of society’s reaction,” Eyup Muhcu, the head of a chamber of architects, told reporters after meeting with Arinc.

Police meanwhile, detained 25 people for “spreading untrue information” on social media and allegedly inciting people to join the protests, the state-run agency reported. They were detained late Tuesday in the city of Izmir, western Turkey, the Anadolu Agency said. Police were looking for 13 others, it added.

The people were wanted for allegedly “inciting enmity and hatred,” the agency said. A lawyer for the suspects denied that claim.

I have look at (their) files and examined the tweets,” the Radikal newspaper quoted lawyer Sevda Erdan Kilic as saying. “There is nothing there to provoke the people (into rioting). They are sentiments that we all share.”

It was not immediately clear what the Twitter comments were.

Turkey’s main broadcast media have been criticized for shunning the coverage of police brutality at the protest onset. Many people turned to social media to keep up to date.

Erdogan has referred to social media as “the worst menace to society.”