Doctor in Syria’s Qusayr pleads for help, over 1000 injured 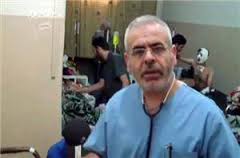 Government warplanes have pounded Qusayr, near the Lebanese border, in a regime offensive to retake the town that has entered its third week while a missile strike on Aleppo reportedly killed 26 people.

Syrian soldiers on Monday backed by Hezbollah fighters mounted a fierce onslaught on Qusayr, a strategic town in Homs province, and also slightly farther north in Dabaa, the site of a disused military airbase partly under rebel control.

A doctor in Qusayr told Al Jazeera there were now more than 1,000 injured people in the town and conditions were becoming increasingly dire.

Kassem Al Zein, who coordinates treatment in several makeshift hospitals, said the wounded were being treated in private homes after the town’s main hospital was destroyed.

“It is a serious catastrophe. The martyrs are more than 200. We have no time to bury them. Some stayed for days in the streets. The smell of death is all over the place, it is not human.

“Where is the world, where are the organisations who are claiming to help the people? We have lost everything.”

Earlier on Monday, a missile struck the village of Kfar Hamra as forces loyal to President Bashar al-Assad mounted a separate assault on the rebel-held countryside surrounding the northern city.

The Syrian Observatory for Human Rights reported the surface-to-surface missile attack on Kfar Hamra killed 26 people, among them six women and eight children.

“Regime forces have taken surrounding orchards and are trying to take the village, and then to break the rebel siege of Nubl and Zahra,” two villages north of Aleppo, the Britain-based group added.

The attack comes a few days into a Syrian army offensive aimed at advancing on Azaz, a rebel stronghold 45km north of Aleppo, the pre-war commercial hub.

Meanwhile, the opposition suffered a political blow when one of the main groups in the National Coalition withdrew from the bloc, amid accusations its leaders were misusing funds and acting in their own interests.

The Syrian Revolution General Commission said it was pulled out of the bloc because it was “taking initiatives far removed from the true revolution and cannot represent the revolution in an authentic way”.

The opposition faction, a Syria-wide network of activists, said some Coalition leaders were “more interested in appearing in the media than helping the revolution”.