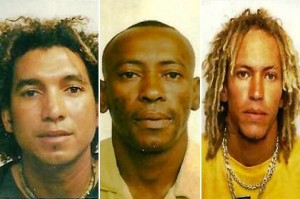 An Egyptian court sentenced five foreigners including a British sailor to death on Monday after they were convicted of drug smuggling, a court official says.

The official says the court in Red Sea Province ruled the defendants were “an international gang” that tried to smuggle three tons of hashish into Egypt via its southeastern coast. In addition to death sentences, the court imposed a fine of 85 million Egyptian pounds ($12 million dollars), according to the official.

The condemned are all sailors who were arrested aboard a ship near the Red Sea coastal town of Marsa Alam, and include a Pakistani and three individuals from Seychelles.

The official spoke on condition of anonymity because he was not authorized to speak to the press.

The British Foreign office expressed concerns and said its consular team is following up the case.

“The British government is extremely concerned at the death sentence passed down to a British national,” a spokesman said and added, “we are opposed to the death penalty in all circumstances. Our consular team in Cairo is in contact with the British national involved and we will do our utmost to prevent this execution.”

Photo: The three Seychelles sailors that were sentenced to death in Egypt over drug smuggling