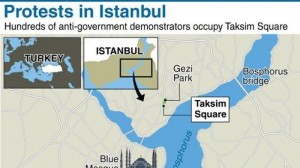 As far as travel warnings go, this seems a little rich.

Syria, the country where a bloody civil war has killed about 80,000 people, is advising its citizens to avoid visiting neighboring Turkey.

The reason? Widespread protests in Turkey that have flared up over the past week.

The Turkish unrest is undoubtedly serious — demonstrators have repeatedly clashed with security forces in Istanbul and other cities, leaving scores wounded.

But it’s still a far cry from the vicious and seemingly intractable war in Syria.

Ankara and Damascus were once allies, but over the past two years, they’ve been at each others’ throats.

Turkish Prime Minister Recep Tayyip Erdogan has repeatedly called on Syrian President Bashar al-Assad to step down. Ankara has withdrawn its diplomats from Damascus. More than 300,000 Syrian refugees have spilled into Turkish territory. Syrian opposition groups have been allowed to operate from Turkey. And last year, Syria downed a Turkish F-4 jet.

Given the tensions, why give up the chance to take a dig at Turkey?

”The Foreign and Expatriates Ministry advises the Syrian citizens against traveling to Turkey during this period for fear for their safety, due to the security conditions in some Turkish cities that have deteriorated over the past days and the violence practiced by Erdogan’s government against peaceful protesters,” it said in a statement.

And that wasn’t the first jab from Syria.

A day earlier, its information minister suggested Erdogan should consider stepping down.