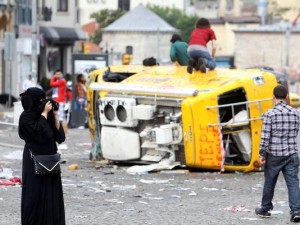 Turkish protesters clashed with riot police into the early hours of Monday with some setting fire to offices of the ruling AK Party as the fiercest anti-government demonstrations in years entered their fourth day.

Turkey’s streets were calm in the morning after a night of noisy protests and violence in major cities.

Bus shelters, paving stones and street signs ripped up by protesters to make barricades that littered a major avenue by the Bosphorus strait in Istanbul where some of the heaviest clashes took place overnight, and graffiti covered walls.

Roads around Prime Minister Tayyip Erdogan’s office in Istanbul were sealed off as police fired teargas to push back protesters in the early hours of Monday.

In the main street near Erdogan’s office, one demonstrator drove a small mechanical digger towards police lines as other protesters followed behind. At a nearby mosque, medical staff including trainee doctors treated those hurt in the clashes.

Police raided a shopping complex in the centre of the capital Ankara where they believed demonstrators were sheltering, detaining several hundred.
Reuters