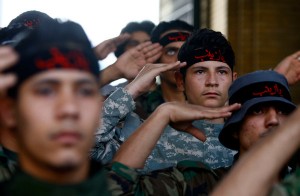 Renewed sectarian killing has brought the highest death toll in Iraq in five years. Young Iraqi scholars at a Shiite Muslim seminary volunteer to fight Sunnis in Syria. Far to the west, in Lebanon, clashes have worsened between opposing sects in the northern city of Tripoli.

In Syria itself, “Shiites have become a main target,” said Malek, an opposition activist who did not want his last name published because of safety concerns. He was visiting Lebanon from a rebel-held Syrian town, Qusayr, where his brother died Tuesday battling Shiite guerrillas from the Lebanese militia Hezbollah. “People lost brothers, sons, and they’re angry,” he said.

The Syrian civil war is setting off a contagious sectarian conflict beyond the country’s borders, reigniting long-simmering tensions between Sunnis and Shiites, and, experts fear, shaking the foundations of countries cobbled together after the collapse of the Ottoman Empire.

For months, the fighting in Syria has spilled across its borders as rockets landed in neighboring countries or skirmishes crossed into their territories. But now, the Syrian war, with more than 80,000 dead, is inciting Sunnis and Shiites in other countries to attack one another.

“Nothing has helped make the Sunni-Shia narrative stick on a popular level more than the images of Assad — with Iranian help — butchering Sunnis in Syria,” said Trita Parsi, a regional analyst and president of the National Iranian American Council, referring to President Bashar al-Assad of Syria. “Iran and Assad may win the military battle, but only at the expense of cementing decades of ethnic discord.”

The Syrian uprising began as peaceful protests against Mr. Assad and transformed over two years into a bloody battle of attrition. But the killing is no longer just about supporting or opposing the government, or even about Syria. Some Shiites are pouring into Syria out of a sense of religious duty. In Iraq, random attacks on Sunni mosques and neighborhoods that had subsided in recent years have resumed — a wedding was recently hit — as Sunni militias fight the army.

With Sunni-led Saudi Arabia, Qatar and Turkey backing the uprising against Mr. Assad, who is supported by Shiite Iran and Hezbollah, sectarian divisions simmering since the American invasion of Iraq are spreading through a region already upended by the Arab uprisings.

The Syrian war fuels, and is fueled by, broader antagonisms that are primarily rooted not in sect but in clashing geopolitical and strategic interests: the regional power struggle between Saudi Arabia and Iran; Iran’s confrontation with the West over its nuclear program; and the alliance between Hezbollah and the secular Syrian government of Mr. Assad against American-backed Israel.

But sectarian feeling has seeped in. Iraq has been especially vulnerable. With the Sunni majority in Syria battling to overthrow a government dominated by Mr. Assad’s Alawite sect, an offshoot of Shiism, some in Iraq’s Sunni minority grew emboldened by the prospect of overthrowing their own Shiite government.

Today, many Iraqis feel they are on the road back to the dark days of 2006 and ’07, the peak of sectarian militia massacres by Shiites ascendant after years of oppression under Saddam Hussein, and by minority Sunnis disempowered by his fall.

While the 2007 American troop surge helped to limit the bloodshed, random attacks against Shiites never stopped. What was different was that the Shiites, who finally felt firmly in control of the security forces, stopped retaliating. But that seems to be changing.

Sunni militias have risen up to fight the army, and for the first time in years Sunni mosques and neighborhoods are being regularly targeted. The first notable attack was in April, at a cafe in the Sunni neighborhood of Amariya; it started late at night as young men played pool, and it left dozens of people dead. While it is unclear who is responsible for the new violence, many Sunnis blame the government, or Iranian-backed Shiite militias.

In Lebanon, perennial clashes between Alawite and Sunni militias in Tripoli have reached their worst level in years as each side blames the other for carnage in Syria.

In Syria, both the government and its opponents insist that their civil war is not a fight between religious sects. Rebel leaders say their only aim is to depose a dictator. Mr. Assad says he is fending off extremist terrorists, and he is careful not to frame the conflict as a fight against the country’s Sunni majority, which he praises for its moderation.

Mr. Assad’s affinity with Hezbollah and Iran is primarily strategic. Though his Alawite sect, about 12 percent of the population, provides bedrock support, most Alawites are secular. Syria’s fewer than 200,000 mainstream Shiites are a much smaller minority, less than 1 percent.

Like Iraqis — who long insisted they were Iraqis first, and blamed outsiders for the rise of sectarian identity, yet descended into bloodletting — Syrians on both sides fear and disavow the slide into sectarianism.

But in real terms, Shiite Hezbollah and the Sunni-dominated Al Nusra Front, a radical group allied with Al Qaeda, have emerged as two of the strongest militias in the Syrian civil war.

Both sides have also been willing to tap into sectarian alliances and emotions. With the West hesitant to fully support the opposition, rebels accepted help from Al Qaeda in Iraq, a Sunni militant group, and the reliable pipeline of weapons and cash flowing from extremist Sunni donors to jihadists, whose calls for an Islamic state found support among some Syrians influenced by hard-line clerics in Saudi Arabia.

On Friday, an influential Sunni Islamist cleric in Qatar, Sheik Yusef al-Qaradawi, called on Sunnis around the world to go to Syria to fight Hezbollah and Iran, calling them enemies of Islam.

Alawite militias in Syria have been accused of slaughtering Sunni families. Sunni rebels and gangs have been accused of kidnapping Shiites. Sunni fighters call Shiites “filth” and “dogs.” Rebel commanders have begun to refer to Hezbollah, whose name means party of God, as the “party of the devil.”

Government supporters call rebels “rats” and paint them with a broad brush as Bedouins and Wahhabis — a puritanical strain of Sunni Islam from Saudi Arabia. Fadil Mutar, an Iraqi Shiite, said at the funeral of his son, who was killed in Syria, that he died fighting Wahhabis, “those vile people.”

“If we start to lose control, you will see thousands of Iranians come to Syria, thousands of Lebanese, from Iraq also,” Mr. Lotof said. “They are going to fight, they are not going to watch. That’s part of their religion.”

In Beirut, Lebanon, Kamel Wazne, the founder of the Center for American Strategic Studies, said that fighters are inspired by religious passions rooted in the seventh-century battle in what is now Iraq over who would succeed the Prophet Muhammad.

After the bitter defeat of the faction that gave rise to the Shiites, the victors captured the prophet’s granddaughter Zeinab and took her to Damascus, where Shiites believe she is buried beneath the gold-domed shrine of Sayida Zeinab.

Today, Shiite fighters help the Syrian government to hold the area around Sayida Zeinab — a foothold that helps prevent rebels from fully encircling Mr. Assad’s seat of power in Damascus.

“Damascus did not fall because Sayida Zeinab is there,” Mr. Wazne said. “They will not allow Zeinab to be captured twice.”

Many devout Shiites have also come to view the Syrian civil war as the fulfillment of a Shiite prophecy that presages the end of time: a devil-like figure, Sufyani, raises an army in Syria and marches on Iraq to kill Shiites. Abu Ali, a student in Najaf, Iraq, said that his colleagues believe the leader of Qatar, a chief backer of Syria’s Sunni rebels, is Sufyani. They are flocking to Syria “to protect Islam,” he said.

Days after pro-government militias killed scores of civilians last month in the Sunni village of Bayda near the Syrian coast, one Sunni resident declared in an interview: “Starting today, I am sectarian. I am sectarian! I don’t want ‘peaceful’ anymore.” Composing himself, he added, “Sister, forgive me for talking this way.”

Photo: Iraqi Shiites at the shrine of Sayida Zeinab in Damascus, where the Prophet Muhammad’s granddaughter is said to be buried.