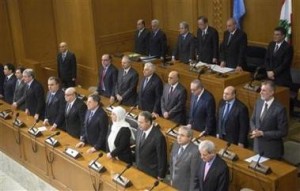 The parliament’s decision to extend its own term 17 months because of deteriorating security conditions related to Syria’s turmoil and the postponing of the upcoming elections was officially announced and published in the official Lebanese gazette.

The decision drew wide western criticism as the European Union said on Friday it regrets that the polls will not be held at the end of the mandate of the Parliament, as scheduled on 16 June 2013.

A statement issued by the EU urged “all the political parties to use the extension to agree on an electoral law, and fix a new date for elections.”

Ninety-seven legislators in the 128-seat body voted to extend parliament’s term until November 20, 2014, in a session that lasted only 10 minutes.

The decision, which had been expected, marks the first time that parliament has had to extend its term since the country’s own 15-year civil war ended in 1990, and underlines the growing turmoil in the country spilling over from the conflict in its neighbor.

It is widely seen as a blow to Lebanon’s tradition of free elections, but it may help lower tensions at a critical time for the fragile and deeply divided country.