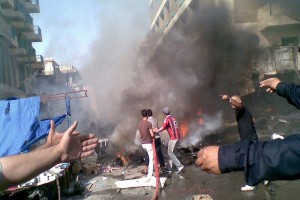 A wave of violence in Iraq that has raised fears of a return to all-out sectarian strife killed more than 1,000 people in May, the United Nations said.

Over the course of the month, 1,045 people were killed and 2,397 wounded in unrest across the country, it said.

Although the violence in Iraq has fallen from its peak during the sectarian conflict in 2006 and 2007, when well over 1,000 people sometimes died per month, the death toll has begun to rise again.

The country has seen a heightened level of violence since the start of the year, coinciding with rising discontent among Iraqi Sunnis that erupted into protests in late December.

Members of the Sunni minority, which ruled the country from its establishment after World War I until Saddam Hussein’s overthrow by US-led forces in 2003, accuse the Shiite-led government in Baghdad of marginalising and targeting their community.

The government has made some concessions aimed at placating protesters and Sunnis in general, such as freeing prisoners and raising the salaries of Sunni anti-Al-Qaeda fighters, but underlying issues have yet to be addressed.