Parliament Extends Own Term for 17 Months 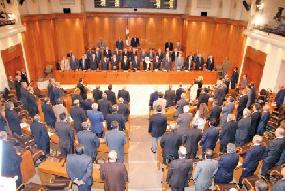 he Lebanese parliament voted on Friday to extend its own mandate for 17 months after the rival political parties failed to reach an agreement over a new electoral law and because of the security situation as a result of the civil war in Syria.

Around 100 MPs from all blocs, except the Change and Reform bloc, voted to extend parliament’s term until November 20, 2014, in a session that lasted only 10 minutes.

It is the first time a parliament has decided to extend its session since Lebanon’s own 1975-1990 civil war.

Agreement for an extension was reached as a battle took place on the Syrian-Lebanese border in which fighters from Lebanon’s Shi’ite Hezbollah political and militant movement have been openly involved. The fighting provoked clashes in Tripoli as gunmen for and against Syrian President Bashar al-Assad took to the streets.

During the brief session, MP Butros Harb demanded to deliver a speech to explain to the Lebanese people the reason behind the extension, but Speaker Nabih Berri did not give him the permission, noting that “the compelling reasons clarified to citizens that the country is not safe.”

“Look at Beirut in the afternoon, there is no traffic on the streets, which means that the security situation is not good,” Berri added.

“The term of the mandate of the legislature will be modified on an exceptional basis to end on November 20, 2014,” rather than this June 20 as scheduled, the motion, submitted by independent MP Nicolas Fattoush, reads.

“Security and political tensions prevent the holding of an election campaign,” the motion read

The disagreement over the electoral law , coupled with the failure of prime minister designate Tammam Salam to form a government after two months of talks, has left a sense of political vacuum in a country struggling with economic slowdown and a refugee tide from Syria.

In a televised address after the session, head of Future Movement parliamentary bloc, former premier Fouad Siniora said: “We did not want the extension of parliament’s term and we were not seeking such a step.”

“We believe that extension involves some sort of turning the back on the core of the democratic system which we must abide by, especially that it is a system based on the rotation of power,” he added.

“The concept of extension contradicts with the mandate granted by the people to their representatives, which is limited to a certain timeframe,” Siniora noted.

Justifying why The Future Movement accepted the extension, Siniora cited “the current tensions, the deteriorating security situations, the blazes that were ignited in Lebanon, and Hezbollah’s declaration of its broad participation in Syria’s battles alongside the ruling regime in a manner that contradicts with the self-dissociation policy, the Baabda Declaration, U.N. Security Council Resolution 1701, the Constitution and the aspirations of large segments of the people.”

“After we exerted the impossible, together with all of our allies, to prevent extension from exceeding a few months for technical reasons, we fell into this dilemma,” Siniora added.

“To avoid political vacuum, we became obliged to consider extension as a good thing, although it is not a good thing,” he noted.

Siniora went on to say that in some of its aspects, “this step seems to be a step towards salvation.”

“I cannot but mention that during the Doha Conference, the meeting almost failed due to some parties’ insistence on the 1960 law,” Siniora recalled.

He noted that proposing electoral laws that “undermine coexistence” represented a reason that prevented the Lebanese from reaching a “fair law.”

The Future Movement had rejected the controversial Orthodox Gathering draft electoral law, under which each sect would elect its own MPs, describing it as a sectarian proposal.

“We believe that we must draw lessons from this bitter experience which led to impeding our commitment, and we must benefit from this by turning the problem into a renewed chance to activate democratic life for the sake of reaching a new electoral law,” Siniora added.

“We’re committed to the need to secure the success of the hybrid law formula,” Siniora said.

“I stress our commitment to the initiative proposed by ex-PM (Saad) Hariri which involves progress on two tracks and the election of a senate in line with the constitution,” he added.

“We must all seek to approve the creation of a senate.”

For his part, LF bloc MP George Adwan noted that “it is in the interest of all the Lebanese to stay away from what’s happening in Syria in order to preserve Lebanon.”

“We said that no elections will take place under the 1960 law and I hope we will start exerting serious efforts to draft a new electoral law,” he added.

“From now on, we have all the time to prepare for a plenary session to discuss the proposals and vote on them,” Adwan said.

He called on all MPs and on Berri to present a new law to the Lebanese.

“This is what the Lebanese Forces and its allies promise,” Adwan added.

Meanwhile, LBCI said the parliament approved an article proposed by MP Sami Gemayel stipulating that “no retirement salary would be paid to MPs for the extension period.”