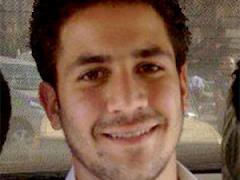 A Chicago man who thought the backpack he left near Wrigley Field contained a bomb was sentenced Thursday to 23 years in federal prison.

Sami Samir Hassoun, 25, a Lebanese citizen and permanent resident alien, was given the lengthy prison term for one count each of attempted use of a weapon of mass destruction and attempted use of an explosive device, the U.S. attorney’s office said in a release.

Hassoun pleaded guilty in April 2012 to placing what he thought was a powerful explosive device in a curbside trash container on a crowded street near the Chicago ball field in September 2010.

Rather than a bomb, however, it was a fake explosive device given him by undercover FBI agents investigating and monitoring his proclaimed desire to commit acts of violence in the city for monetary gain and to cause local political instability, federal authorities said.

“The thought of what might have happened if it was real is horrific,” said U.S. District Judge Robert Gettleman, who ordered Hassoun to serve five years of supervised release following his incarceration. Hassoun will be subject to deportation when he is released, the judge said.

Authorities said Hassoun chose the location and time of the proposed attack; there was a Dave Matthews concert at Wrigley Field Saturday night, Sept. 18, 2010, just before he was arrested.

“If the bag that Hassoun left in that Clark Street trash receptacle had contained the type of explosive device that he thought it did, the results would have been horrific,” U.S. Attorney Gary S. Shapiro said. “In conversation after conversation, Hassoun made clear that he was willing to bomb innocents and shoot police officers as part of a bizarre effort to destabilize the city of Chicago. And his actions demonstrated that his words were more than empty bravado.”