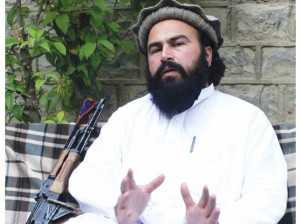 A suspected U.S. drone strike killed the No. 2 commander of the Pakistani Taliban on Wednesday, Pakistani intelligence officials said, although the militant group denied he was dead.

If confirmed, the death of Waliur Rehman would be a strong blow to the militant group responsible for hundreds of bombings and shootings across Pakistan. The United States has a $5 million bounty out on Rehman, who Washington has accused of involvement in the 2009 suicide attack on a U.S. base in Afghanistan that killed seven Americans working for the CIA.

Two officials said their informants in the field saw Rehman’s body, while a third said intelligence authorities had intercepted communications between militants saying Rehman had been killed. The officials spoke on condition of anonymity because they were not authorized to brief reporters.

A spokesman for the Pakistani Taliban denied the reports.

“This appears to me to be false news. I don’t have any such information,” said Ahsanullah Ahsan.

White House spokesman Jay Carney declined to confirm if Rehman was dead. He said if the reports were true, Rehman’s death would deprive the militant group of its chief military strategist involved in “horrific attacks” on a CIA base in Afghanistan and other attacks against Pakistani civilians and soldiers.

Most of North Waziristan is under militant control, and journalists cannot access the rugged region near the Afghan border, making independent confirmation difficult.

The missile attack was the first since Pakistan’s May 11 elections in which the American drone program was a hotly debated topic.

It was also the first strike in Pakistan since President Barack Obama’s speech last Thursday during which he discussed more restrictive rules he was implementing on drone use in places such as Pakistan and Yemen.

The tribal region in northwestern Pakistan is home to local and Afghan militant outfits, including al-Qaida-linked fighters. The U.S. has often criticized Pakistan, saying it does not vigorously target militants in these areas who then attack American troops in Afghanistan.

Pakistani officials say their military is already overtaxed fighting militants in the tribal regions and in the southwestern province of Baluchistan, and that the casualties they’ve already incurred have not been properly recognized.

Washington’s drone program remains deeply unpopular in Pakistan, even though the number of strikes has dropped significantly since the height of the program in 2010. The strikes usually target al-Qaida-linked insurgents or other militants who fight in Afghanistan, although some strikes have killed militants at war with the Pakistani government.

The Pakistani Taliban, officially called the Tehrik-e-Taliban, has been battling government forces for years in a bid to push them from the tribal regions, cut Pakistan’s ties with the U.S. and eventually establish their brand of hardline Islam across Pakistan.

Rehman has been on the U.S. radar for years. In 2010, Washington offered $5 million for information leading to Rehman under their “Rewards for Justice” program.

While Rehman was mostly known for his activities in Pakistan, the U.S. said in its announcement that he also participated in cross-border attacks in Afghanistan against U.S. and NATO personnel.

The U.S. wanted Rehman in connection with his alleged involvement in an attack on a U.S. base in Khost, Afghanistan in 2009. The attack on Camp Chapman killed seven Americans working for the CIA, a Jordanian intelligence officer and wounded six other CIA personnel.

Pakistan’s incoming prime minister, Nawaz Sharif, has repeatedly said he is against the use of American drones on Pakistani soil, and Pakistani officials have demanded publicly that the program be stopped.

Sharif has said he would be open to negotiating with the Pakistani Taliban in order to end the fighting in the tribal agencies. Rehman’s death could complicate that.

“He was a very cool-minded person, a very intelligent person and he was someone that the government could talk to,” said Mansur Mahsud, director of administration and research at theIslamabad-based FATA Research Center.

Rehman was believed to be about 42 or 43 years old and was from South Waziristan, Mahsud said. He had already been fighting American troops in Afghanistan when the TTP was created in late 2007 and he turned his focus onto Pakistani targets.

The Ministry of Foreign Affairs condemned the drone strike Wednesday but made no mention of Rehman in their brief statement.

“The Government of Pakistan has consistently maintained that the drone strikes are counter-productive, entail loss of innocent civilian lives, have human rights and humanitarian implications and violate the principles of national sovereignty, territorial integrity and international law,” the ministry said.

Senior civilian and military officials are known to have supported some of the attacks in the past, but many say that is no longer the case.

Obama’s speech last Thursday was his most extensive comments to date about the secretive drone program, which has come under increased criticism for its lack of accountability.

The president cast drone strikes against Islamic militants as crucial to U.S. counterterrorism efforts but acknowledged that they are not a “cure-all.” The president also said he is deeply troubled by civilians unintentionally killed in the strikes and announced more restrictive rules governing the attacks — measures that his advisers said would effectively limit drone use in the future.

White House spokesman Carney said the new standards do not mean the administration would discuss details of every counterterrorism operation.