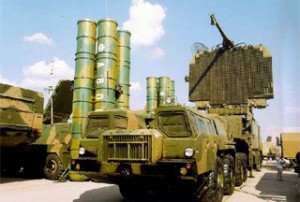 Syria has received the first shipment of an air defense system from Russia, President Bashar al-Assad was quoted as saying, sending a signal of military strength days before an EU arms embargo on the war-torn country lapses.

“Syria has received the first shipment of Russian anti-aircraft S-300 rockets,” Lebanese newspaper al-Akhbar newspaper , which is linked to syria quoted Assad as saying in an interview due to be broadcast later on Thursday at 9:00 pm local time by Hezbollah’s Al Manar TV .

More of the missiles would arrive soon, he was quoted as saying.

Russia has said it would deliver the missile system to the Syrian government over Western objections, saying the move would help stabilize the regional balance.

A staunch ally of the Assad government, Moscow has appeared to grow more defiant since the European Union let its arms embargo on Syria expire, opening up the possibility of the West arming the rebels battling to topple the president. The embargo lapses on June 1.

The United States, France and Israel have all called on Russia to stop the missile delivery.’s ally, the Shi’ite Muslim militant group Hezbollah.

More than 80,000 people have died in Syria since peaceful protests against four decades of Assad family rule led to a civil war that has pitted the president’s forces and his ally, Hezbollah, against Syrian rebels and a flow of Sunni Islamist militants who have come to help them from abroad.

Moscow says the lapsing of the EU embargo complicates U.S. and Russian-led efforts to set up a peace conference between the Syrian government and its opponents, who want an immediate end to four decades of Assad family rule.

The Syrian leader said he planned to go to the “Geneva 2” conference, al-Akhbar reported, though he was unconvinced of a fruitful outcome and said he would continue to fight the militants.

Officials in Israel, the United States’ main ally in the region, say the S-300 could reach deep into the Jewish state and threaten flights over its main commercial airport near Tel Aviv.

Al-Akhbar said Assad also stressed ties between his forces and Hezbollah militants now openly fighting on the Syrian side of the Lebanese-Syrian frontier.

“Syria and Hezbollah are part of the same axis,” al-Akhbar quoted him as telling al-Manar.

“The Syrian army is the one fighting and leading the battles against the armed group, and this fight will continue until all those who are called terrorists are eliminated.”

Syria sits along the faultlines of several regional and ethnic conflicts, and violence in the country is increasingly seeping across its borders.

Israel, wary of any Syrian weapons being sent to Hezbollah in Lebanon, has already launched three air strikes against Damascus to stop suspected transfers.

A recent string of strikes in the capital Damascus, which shook the entire city, stoked an angry reaction from Syria. State media outlets said Syria would respond to any further attacks, and would also allow militant groups to attack Israel from a shared border on the Golan Heights.

Israel captured much of Syria’s Golan Heights in a 1967 regional war and occupies the territory today, but Assad and his father, the deceased president Hafez al-Assad, had kept the border quiet for decades.

“The Syrian government will not stand in the way of any Syrian groups that want to wage a war of resistance to liberate the Golan,” Assad was quoted as saying in the upcoming interview.

Hezbollah has stated it would be willing to support groups that chose to launch operations from the Golan.

Israel has become particularly wary of the S-300 shipments. Its defense minister Moshe Yaalon said on Tuesday, however, that the shipments were not yet on their way.

Sources close to the Russian weapons export monopoly Rosoboronexport said last year that an earlier agreed S-300 deal had been frozen due to concerns over violence in Syria. But one of the sources said Syria had already paid 20 percent of the contract price.

Earlier this month, Israel was reported to have told Washington that Syria had begun payments for a $900 million purchase of S-300s, with an initial deliver due within three months.