Red alert issued for the Copahue volcano in Chile 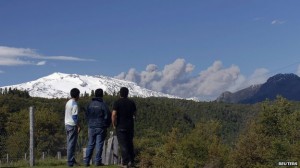 Around 3,000 people living near the Copahue volcano on the border of Chile and Argentina in South America, have been ordered to evacuate the area.

Both countries have issued a red alert, which is the highest level, saying the Chilean volcano could erupt at any time.

The volcano which stands at nearly ten thousand feet high, has been spewing gas and minor earth tremors have been registered in the area.

According to Chile’s Emergency Office, the evacuation will affect around 460 families living within 15 miles of Copahue.

The volcano hasn’t erupted since 1991 but became highly active in 2001.

A red alert was also issued last December after the volcano began spewing ash and gas and people living nearby were temporarily evacuated.