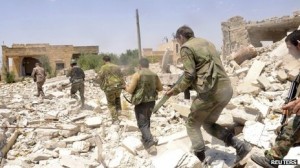 European Union foreign ministers have agreed not to renew the union’s arms embargo on the Syrian opposition, due to expire on Saturday.

But there was no immediate decision to send arms to Syrian rebels and all other sanctions remained in force, the EU foreign policy chief said.

The decision came after lengthy talks among divided ministers in Brussels.

Meanwhile, a Lebanese military source says three soldiers have been killed by gunmen near the Syrian border.

The assailants fled across the border into Syria on following the attack on Tuesday morning near the north-eastern town of Arsal, a source reportedly said.

A far-reaching package of EU sanctions against the government of Bashar al-Assad was due to expire on Saturday.

In 12-hour talks in Brussels foreign ministers were unable to reach the unanimous decision required to extend the current arms embargo, and so agreed to renew the other sanctions – including an assets freeze on President Assad and his aides, and restrictions on trade in oil and financial transactions – without it.

EU foreign policy chief Catherine Ashtonread out their joint text at a news conference late on Monday, saying member states had agreed not to “proceed at this stage with the delivery” of equipment until now subject to the ban.

She said the EU’s Foreign Affairs Council would review this position before 1 August, in light of fresh developments to end the conflict including the ongoing US-Russia peace initiative.

Now individual member states will have to decide what their own rules are regarding sending arms to Syria.

Britain and France had been pressing for the ability to send weapons to what they call moderate opponents of President Assad, saying it would push Damascus towards a political solution to the two-year conflict.

The BBC’s Jim Muir, in Beirut, says it is clear that the EU decision will not make much difference on the ground in the immediate future.

An EU decision on whether Britain, France and others can begin carefully-controlled supplies of arms to the rebels will come in August at the earliest, and will depend on the outcome of an international peace conference next month organised by the US and Russia, our correspondent adds.

The Syrian opposition has not said whether to attend the conference, and was locked in talks in Istanbul, Turkey, as an unofficial deadline to decide on its attendance passed.

* Opposition activists in Syria tell the BBC they have documented the deaths of more than 200 men, women and children in al-Bayda and Baniyas earlier this month
* French officials are testing samples brought back from Syria by two journalists for Le Monde newspaper, who say they witnessed a chemical weapons attack by government forces against the rebels on the outskirts of Damascus last month
* US Secretary of State John Kerry met Russian Foreign Minister Sergey Lavrov in Paris, with Mr Kerry saying they were both “deeply committed” to a transitional government in Syria chosen by mutual consent
* One of the strongest advocates of US military aid for the Syrian opposition, Senator John McCain, has made a surprise visit to Syria for discussions with rebel leaders
* Fighting in Syria continues around the strategic town of Qusair, a few miles from the Lebanese border, with a prominent Syrian female TV journalist, Yara Abbas, killed just outside the town.
* UK Foreign Secretary William Hague welcomed the outcome of the Brussels talks, saying it was “important for Europe to send a clear signal to the Assad regime that it has to negotiate seriously, and that all options remain on the table if it refuses to do so”.

But other countries had opposed opening the way for weapons to be sent, saying it would only worsen the violence that has already cost at least 80,000 lives.

Austria had been a key opponent of arms being sent.

“The EU should hold the line. We are a peace movement and not a war movement,” Austrian Foreign Minister Michael Spindelegger said.

There has been increasing pressure on the international community to act since allegations emerged of chemical weapons being used in the conflict. Syria has denied using chemical weapons.

The dropping of the arms embargo was welcomed as a “step in the right direction” by George Jabboure Netto, who works as liaison for foreign affairs in Washington DC for the opposition Syrian National Council.

He said the SNC were willing to negotiate an end to the conflict, but only on the condition that there was no place for President Assad in the new Syria.

The EU embargo, first imposed in May 2011, applies to the rebels as much as the Syrian government.

But in February this year, foreign ministers agreed to enable any EU member state to provide non-lethal military equipment “for the protection of civilians” or for the opposition forces, “which the Union accepts as legitimate representatives of the Syrian people”.

UK aid agency Oxfam has warned of “devastating consequences” if the embargo ends and more arms are sent into Syria.