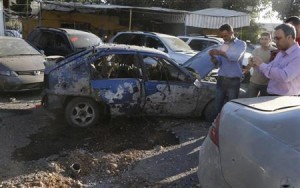 The two-year-old conflict in Syria has already tumbled into Lebanon’s Bekaa Valley, exploded into deadly street fighting in its northern city of Tripoli and driven half a million refugees across the same porous border to escape the bloodshed.

But Sunday’s rocket attack, which wounded five people in a Shi’ite neighborhood of Beirut, marked the first apparent targeting of Hezbollah’s stronghold in the south of the capital and raised memories of years of civil war in the city.

The rockets struck hours after a defiant Hezbollah leader Sayyed Hassan Nasrallah vowed that his guerrilla group, waging war alongside President Bashar al-Assad against Syrian rebels, was fighting for victory whatever the cost.

Both events were milestones in the creeping contagion of a conflict which has already killed 80,000 people within Syria’s borders and fuelled sectarian tension from Beirut to Baghdad. It has sucked in regional rivalsIran, Saudi Arabia, Turkey, Qatar, Iraq and Israel and polarized major powers – the U.S. and Europe siding with the opposition and Russia andChina with Assad.

“It is hugely alarming. It points to the fact that there are a decreasing number of brakes that can be applied to this situation,” said Julien Barnes-Dacey, senior policy fellow at the European Council on Foreign Relations.

“It’s spiraling out of control, moving deeper and deeper within Syria but clearly now across Lebanon and the region.”

No one claimed responsibility for Sunday’s attack but it was widely assumed to be a response to Nasrallah’s speech by Syrian rebels or their sympathizers.

One Syrian rebel described it as a warning to Lebanese authorities to rein in the Iranian-backed Shi’ite Muslim group, which is armed and financed by Iran, or face further consequences.

By dropping any ambiguity about Hezbollah’s determination to keep Assad in power, Nasrallah may have been laying down a marker to the Syrian leader’s Western and Arab foes that any increase in support for rebels would be futile.

The European Union is considering whether to amend sanctions on Syria to allow EU states to send weapons to the rebels and a U.S. Senate panel voted last week to arm them – though it is not clear whether any such bill could ever get through Congress.

“The message Hezbollah is trying to send is a signal that both Iran and Hezbollah are willing to match any increase in support to rebel groups,” said Ayham Kamel, Middle East analyst at the consultancy Eurasia Group.

“If the conflict is expanded, Hezbollah and Iran are willing to support the regime no matter where it leads”.

Nasrallah’s comments also follow weeks of counter-offensives by Assad’s forces around the capital, in the southern province of Deraa and around the town of Qusair on the Lebanese border, which have strengthened Assad’s hand ahead of planned peace talks which Damascus says in principle it is ready to attend.

Kamel said Hezbollah’s impact on the Syria’s civil war was not as dramatic as believed in some Western capitals and that reorganizing Assad’s armed forces, most likely on the advice of his international allies, to confront the rebels had been a greater factor behind his recent battlefield gains.

“There has been a strategic plan to restructure the Syrian military and its divisions to make them more effective for urban warfare and to establish new forces,” he said referring to units which had been formed out of local militias and which together added up to additional forces of tens of thousands.

“The restructuring is important … the additional forces have been important, and I’d put Hezbollah third on that list. All are indispensable for the regime, but there are different levels,” Kamel said.

The number of Hezbollah fighters in Syria so far was likely to be in the “low thousands”, Barnes-Dacey said, with plenty more in reserve. Nasrallah himself said on Saturday Hezbollah could summon “tens of thousands” with a couple of words.

“I don’t think Hezbollah would leave themselves exposed in their own backyard to secure Assad, but clearly they have a significant fighting force and could increase what they are sending to Syria to quite a large degree before they have to make those choices,” Barnes-Dacey said.

Assad’s Western foes are already reluctant to commit to intervention in Syria or military support for the rebels, who include al Qaeda-linked groups equally hostile to the United States and Europe as they are to the Syrian president.

Sunni Muslims from the Lebanese port of Tripoli cross into Syria to fight Assad while their city itself has endured a week of fighting in which 25 people have been killed, showing how Syria’s neighbors can simultaneously suffer from the spread of its conflict and further fuel the fighting within its borders.

“When Hezbollah sent fighters to Syria and occupied Sunni villages, that provoked the Sunnis,” said Sunni Muslim preacher Sheikh Salem Rafei, referring to the area around the Syrian border town of Qusair where Hezbollah fighters and the Syrian army are waging a week-long assault to drive out rebels.

“Our brothers in Qusair appealed for our help, so it was our duty to call on those who could do so to perform jihad to support them,” Rafei told Reuters in Tripoli.

Banners in a Tripoli square celebrating the “martyrdom” of local fighter Ahmad al-Shihab in Qusair highlight how the two towns are effectively twin battlegrounds in the same war. “There’s no doubt that what is happening in Tripoli is an echo of what is happening in Syria, especially Qusair,” Rafei said.

Both Rafei and Nasrallah urged Lebanese fighters to keep their battle within Syria, reflecting near universal anxiety in Lebanon to avoid a repeat of its ruinous 1975-1990 civil war.

Lebanon, a Mediterranean state of 4 million people, made up of a mosaic of Christian, Sunni and Shi’ite Muslim sects, is struggling to cope with an estimated million Syrians including refugees, labourers and their families.

Still saddled with a heavy debt burden from its post-war reconstruction and suffering a sharp slowdown in economic growth, Lebanon is also in political limbo after the resignation of Prime Minister Najib Mikati two months ago.

Mikati’s successor, Tammam Salam, has so far failed to form a new government and squabbling over a parliamentary electoral law means next month’s election will be delayed – threatening the country with political vacuum.

Druze leader Walid Jumblatt said on Sunday parliament should be extended for at least a year, since political stability was a priority if Lebanon was to overcome its security challenges.

“There is still some minimal level of commitment by the mainstream Sunni Muslim, Shi’ite Muslim and Christian parties not to let Lebanon become a battleground,” Kamel said. “But this has become a regional conflict, so the risk of uncalculated scenarios has gone up.”

For now, Hezbollah’s unquestioned military ascendancy in Lebanon itself means that the group which fought Israel to a standstill in a 34-day war seven years ago is unlikely to face a sustained challenge from domestic rivals.

But its deepening war in Syria may prove more challenging than anything it faced in three decades fighting Israeli troops, said Peter Harling of the International Crisis Group.

“Hezbollah will soon realise that this conflict is far bloodier than anything it has seen before. This is a very deadly conflict. If they go all in, they will have huge losses”.