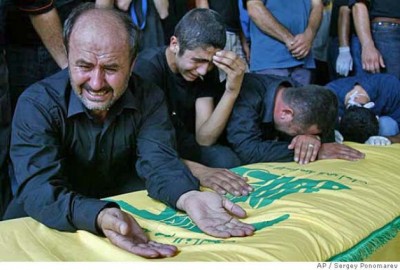 On a country road in Lebanon’s northeast, traffic is heavy; ambulances screech by, sirens blaring, and cars packed with mourners follow coffins as Hezbollah brings wounded fighters home from Syria, and its dead.

With the bodies from the battle over the border at Qusayr, comes the violence, as civil conflict between Syria’s Iranian-backed ruler and Sunni rebels spreads across the Middle East; the Shi’ite militia’s drive to save Syria’s president is testing Lebanon’s own fragile, sectarian peace and raises the stakes in a broader struggle for power in the region and the wider world.

Having long denied its engagement in Syria behind President Bashar al-Assad, Hezbollah has committed itself this week to the fight for the strategic small town of Qusayr, sending hundreds of men and losing dozens wounded and between 20 and 50 killed.

For all that staff at hospitals taking in the wounded around the town of Hermel keep doors closed to journalists and insist “There’s nothing to see,” the war has widened its scope.

And with Sunnis and Alawites in the nearby Lebanese port of Tripoli also engaged in the fiercest communal fighting yet, the spread of violence beyond Syria is accelerating.

Already sectarian killing has surged in Iraq, bombs have hit Turkey and Israeli air strikes in Syria targeted Iranian arms for Hezbollah while world powers remain divided among themselves as they try to push Syria’s rivals into holding peace talks.

For Rami Khouri at the American University of Beirut, Hezbollah’s Syrian venture risks rebounding into Lebanon and could even – in a very worst case – fuel a regional war:

“It would vastly increase the likelihood of massive internal Lebanese strife between pro- and anti-Hezbollah groups, broadly spitting Sunnis and Shi’ites against each other, while also inviting another major war with Israel, or possibly participation in an American-Israeli/Iranian-Syrian war.”

Hezbollah, armed by Iran since Lebanon’s civil war in the1980s, outguns Beirut’s weak central government as well as other factions, including Sunnis, Christians, Druze and Palestinians.

But in nailing its colors to Assad’s bid to crush a Sunni uprising, the Shi’ite movement has alienated fellow Arabs in the region who once respected it, at least for fighting Israel. It may also irk Lebanese Shi’ites, who have counted on Hezbollah’s protection locally but are not necessarily enthusiastic about dying for Iran in its rivalry with Arab powers and the West.

Rafik Nasrallah, a political analyst in Beirut who is close to Hezbollah, said the movement had been obliged to intervene in Syria to protect Lebanese interests and it had taken into account the prospect of a violent reaction from rival groups:

“There is no Lebanese state, there are groups in the security apparatus here that serve different regional powers or countries,” Nasrallah said. “Hezbollah’s job is to protect Lebanon and its borders, it is doing what it has to do.

“This is a decisive battle,” he said of Qusayr, near Homs, which rebels have held to secure supply routes from Lebanon and to disrupt movement between Damascus and Syria’s Alawite region.

“Hezbollah believes that this battle is of great strategic importance, and they will bear the consequences,” he added, as reports from Syria indicated Hezbollah fighters and Assad’s troops had made some gains after days of fighting in the town.

On the frontlines, the intervention appears to have hardened sectarian attitudes among rebels fearful of losing a key position: “The fall of …. Qusayr will completely change the struggle in Homs province from a revolution into a major assault on Alawites and Shi’ites wherever they are,” said a fighter who uses the name Abu Bilal, speaking to Reuters from Homs.

“Rebel battalions here all agree on this. And every side of this conflict knows this is what is at stake in Homs.”

Hezbollah’s forces are tiny beside the tens of thousands of troops, with tanks and jet aircraft, that Assad can call on even after Sunni desertions from his army. But it does have thousands of guerrillas, many of whom saw action against Israel in 2006.

Hezbollah’s alliance with Assad has not been an easy one for it on the regional stage, but its leaders remain unapologetic, arguing it is crucial to their “axis of resistance” – the term it uses for its anti-Israel alliance with Tehran and Damascus.

The “Party of God,” once admired across the Arab world as a bulwark against Israel, is now derided as “Hezb al-Shaytan” -Party of the Devil – and a sectarian cats paw of non-Arab Iran.

Former Lebanese Prime Minister Saad Hariri, a Sunni with powerful allies in Saudi Arabia, said this week: “Hezbollah has chosen to copy Israeli crimes against Lebanon and its people and apply them to the inhabitants of the Syrian city of Qusayr.

“It has become the spearhead of a crime carried out by the regime against its people, which can also be described as the Iranian defense army of Bashar al-Assad’s regime.”
“Resistance”

Hezbollah, in turn, has sought to shore up its pan-Arab credentials by accusing its rebel enemies at Qusayr of being sponsored by Israel and Western powers – thus justifying its intervention as part of its “resistance” to the Jewish state.

“Israel is in Qusayr … The attack on Syria is all part of an Israeli, foreign-led attack on Syria,” said Amin Hate it, a Lebanese commentator close to Hezbollah. “This is a party of ideology, not nationalities. So wherever there are enemies to those beliefs, its fighters will go. They go voluntarily.”

It is unclear, however, quite how willingly Lebanese Shi’ites will go on fighting and dying in Syria like Radwan and Ali Qassem al-Attar, brothers who fell at Qusayr a few days ago and in whose memory yellow Hezbollah banners now fly at a spot near their home, off a dusty side road in the Bekaa Valley.

Syria’s war is intruding on pastoral tranquility. Men in camouflage secure checkpoints; the peace of cows grazing nearby is shattered by occasional rocket fire. Locals point to a white-tented Hezbollah position just over the border, on Syrian land.

But a security source close to Hezbollah believes it cannot count on unlimited backing from its local supporters. Leaders had calculated, he said, that the movement could afford to lose several dozen men at Qusayr, due to its strategic importance.

But if the battle drags on, recruitment might suffer. Party media were playing down the losses, he said. But he added: “The party can’t help that, whatever they do, if a man in one of these villages dies, every villager will go to that funeral.”

“Soon they could start asking ‘Why should we fight and die for Syrians?’“