All Dictatorships, Including The Syrian One, Are Damned. 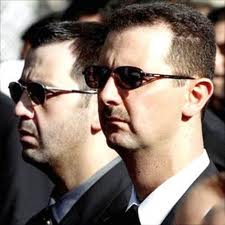 The popular adage “What is good for the Goose is good for the Gander” is meant to be a populist easy way to restate the Golden Rule which was best expressed by Mathew 7:12 as “In everything, therefore, treat people the same way you want them to treat you, for this is the Law and the Prophets” is also seen as the foundation of ethical reciprocity. An excellent illustration of this norm is practiced by the young in their first few years of schooling during birthday celebrations: one person cuts the cake while the other chooses which portion to take. If only grownups can keep these lessons alive as they grow up. Maybe some of us try to practice what we preach and attempt to be fair and consistent. Not the Syrian Government and not Bashar Assad though. How can they be just when their total existence from the inception of the regime is based on force, tyranny and illegitimacy? Their constant fear of truth must be the only logical explanation why they pretended to have elections. They forgot though that election proper rests on the intrinsic right to free speech and free expression. Elections are supposed to be a contest between various individuals who have different priorities about how to improve the level of welfare of the public at large. These candidates will explain to their constituents the various plans that they have and then the voters will weigh these programs and determine which they think is best for them. Elections in Syria have been a sham, every single one of them and the reason must be that those who were ruling forcefully and illegitimately did not trust those that they governed.

All dictators are afraid of the truth and that is why they set up these elaborate police systems in order to spread fear among their citizens. Well the Syrian dictatorship is one of the worst. It has lasted for over forty years by setting up what many have called the most cruel Stasi machine outside of the then GDR, East Germany. Actually the Syrian police whose role is to oppress, exploit and scare decent citizens was set up with the help of East Germany. Where is East Germany now? It has bitten the dust and as history teaches us all dictatorships will eventually bite the dust including the Syrian rulers.

The Syrian uprising has been going on for over two years that have resulted in an abnormally high level of destruction, thanks to the selfish Syrian dictatorship that is willing to pay any price to continue its rule of terror. The losses, the real losses are not limited to the destruction of city quarters and infrastructure but have resulted in over 80,000 deaths so far. Even that grotesque price becomes small when compared to the price that the future generation will have to bare.  This war is robbing the youth of their future and nothing, absolutely nothing, can be crueler than that.

This monstrous regime is not satisfied to mete out its terror, which has also resulted in about a 1.5 million Syrians seeking refuge in neighbouring countries and at least an equal number of refugees within the country, but has the temerity to use an illegal militia from a neighbouring country in order to launch well coordinated attacks with heavy weapons on a city that had been overrun over a year ago by the opposition. This regime seeks the aid of a well equipped and well trained illegal militia while it is lambasting the opposition for its use of foreign fighters. The double standards do not stop here either. This same Syrian administration has been complaining to whoever would listen about light arms smuggling that has been coming into Syria to help arm the FSA and its supporters level the field against the Assad killing machine but yet this same administration has been smuggling, yes smuggling, sophisticated weapons to arm militant groups in Lebanon. It does not dawn on this administration apparently that if they have the rights to destabilize others then maybe the Syrian people have the right to obtain some arms to protect themselves from the common massacres committed against them by the Syrian forces.

The irony does not stop here either. This same Syrian government was proud to encourage and facilitate the crossing of Jihadists from all across the Moslem world into Iraq but now that some of these jihadists want to cross the border in the opposite direction this activity has become abominable.

As for those that believe the constant refrain that this Syrian reign of terror is justified because it is what is keeping Al Qaeda and other extremists from taking over Syria I have fertile land for sale in the Syrian dessert not to mention bridges in NYC. The Syrian people are asking for a chance to write a new constitution with guarantees their individual right to free expression, multiparty systems and open and free elections. They are entitled to elect whoever they choose. If they so happen to elect an extreme Islamist then so be it. The essence of democracy is to accept the will of the people. If they find out that their choice did not deliver what was promised then they will vote them out of office in the next round, they will not be forced to accept a leadership that passes from father to son. The common Syrian has the right to be heard and she will.

Dictatorships are always on a path to self destruction. There is a limit to how much the public will take. Eventually enough courageous people will ask for their freedom and will shout from rooftops that the emperor has no cloths and that no one can enslave them because they are born free. The truth shall set them free. The Syrian dictatorship is not any different; it has been on its road to perdition for over four decades. That is inevitable.