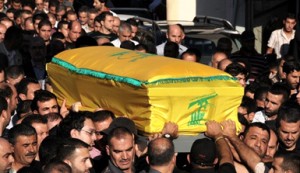 BEIRUT, Lebanon – Hezbollah has suffered heavy losses in the Syrian town of Qusayr , the Syrian Observatory for Human Rights reported on Monday adding that at least 23 members of the Lebanese militant group have been killed fighting alongside regime troops.

“Reliable sources informed the Syrian Observatory for Human Rights that 23 members of Hezbollah’s elite forces were killed and more than 70 others wounded in clashes in the town of Qusayr yesterday,” the group said in a statement.

The deaths came in fighting that followed a long-expected government assault on Qusayr, a rebel stronghold in the central province of Homs.
Fighters from Hezbollah, a staunch ally of Syrian President Bashar al-Assad, have reportedly been battling alongside his troops for weeks in the Qusayr area.

The government has made recapturing Qusayr and the surrounding region a key priority, partly because of the town’s strategic importance.
It connects the capital Damascus to the coast, and also lies near the border with Lebanon.

The Observatory said that at least 55 people were killed in Qusayr yesterday, most of them rebels, excluding those Hezbollah fighters and regime soldiers.

At least 94,000 people have been killed since the Syrian conflict began in March 2011, according to the group, which relies on a network of activists, doctors and lawyers on the ground.

Lebanon’s An Nahar newspaper identified 13 of the Hezbollah fighters that were killed in Qusayr battles :