Syria’s rebels take over oilfields once belonging to Assad 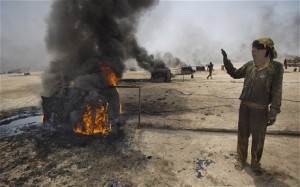 Al-Qaeda’s Syrian wing is helping to finance its activities by selling the product of oilfields that once helped to prop up the regime of Bashar al-Assad.

Up to 380,000 barrels of crude oil were previously produced by wells around the city of Raqqa and in the desert region to its east that are now in rebel hands – in particular Jabhat al-Nusra, the al-Qaeda off-shoot which is the strongest faction in this part of the country.

Now the violently anti-Western jihadist group, which has been steadily extending its control in the region, is selling the crude oil to local entrepreneurs, who use home-made refineries to produce low-grade petrol and other fuels for Syrians facing acute shortages.

The ability of Jabhat al-Nusra to profit from the oil locally, despite international sanctions which have hindered its sale abroad, will be particularly worrying to the European Union, which has voted to ease the embargo but at the same time wants to marginalise the extremist group within the opposition.

In the battle for the future of the rebel cause, the oil-fields may begin to play an increasingly strategic role. All are in the three provinces closest to Iraq – Hasakeh, Deir al-Zour, and Raqqa, while the Iraqi border regions are the homeland of the Islamic State of Iraq, as al-Qaeda’s branch in the country calls itself.

It was fighters from Islamic State of Iraq, both Iraqi and Syrian, who are thought to have founded Jabhat al-Nusra as the protests against the rule of President Assad turned into civil war.

Because of sanctions, Jabhat’s oil is largely shipped to thousands of home-built mini-refineries that have sprung up across the north of the country. The crude is distilled in hand-welded vats dug into the ground and heated with burning oil residue.

The Jabhat Al Nusra, a proscribed islamic militant group control the oil fields and cannot export due to sanctions, so this provides some cash flow to the rebel cause as well as much needed fuel for Northern Syria

It is not clear how much money is being channelled back to the group. But all those buying the raw product were aware that Jabhat was profiting.

“Jabhat do not ask for taxes or charges for this trade,” said one of them, Omar Mahmoud, from Raqqa province. “But we are buying the oil from them so they do not need to.”

Syria’s oil output, never as great as that of some of Syria’s Arab neighbours, fell to about 130,000 barrels a day after the outbreak of the revolution against the Assad regime.

However, Jabhat al-Nusra are now putting that to good use. The homes refineries are turning out poor quality but usable – and much-needed – petrol and kerosene for cooking and home stoves.

Their product might not meet the quality, and certainly the health and safety standards, demanded by Shell or ExxonMobil, but it provides a living to thousands of blackened figures willing to risk the business’s inherent dangers.

In parts of north-east Syria, the stills are set up by every road-side, the produce sold like fruit from lay-bys to drivers as they pass. But the unquestioned centre of the industry is the desert outside the small town of Mansoura, a few miles west of Raqqa city and on the other side of the Euphrates River.

Here, the entire horizon is a blighted scene of billowing clouds out of which dark figures occasionally emerge on foot or roaring motor-bikes. Near the road sit oil tankers carrying the raw product.

“I make 3000 Syrian pounds (about £15) a day,” said Adel Hantoush, 19, his legs dripping with crude, a filthy headscarf wrapped around his face. A building site casual labourer in better times, he helps support his father, mother and nine brothers and sisters.

Black smoke blew past his head as colleagues poured fuel into the burning pit under their tank. “The last thing I think about is my health,” he said. “If I don’t do this, my family will die.”

The amateur production process is quite simple, and easily explained in school text books.

The oil is heated slowly, with the different grades of product evaporating at different temperatures. The vapour is fed through pipes channelled through pits filled with water to recondense it as a liquid, which runs out into containers at the other end.

Near Raqqa, they pay 4000 Syrian pounds (£20) a barrel, with the price rising for smaller quantities and as the distance increases. A single refining vat can take six barrels at a time, producing maybe 30 litres of petrol, similar quantities of cooking fuel and higher amounts of diesel.

Abdulwahad Abdullah, a wheat farmer from north of Raqqa who runs a single still through two five-hour cycles a day, says he can make 20,000 pound profit (£100) on a good day.

It is a Mad Max scene, indicative of the chaos the war has unleashed in Syria, creating a landscape ideal for the methods of dominance al-Qaeda learned in post-war Iraq.

General Selim Idriss, the head of the western-backed opposition Military Council, has appealed for Western help specifically to seize the fields from Jabhat, but the forces required – he put it at 30,000 men – make that a pipe dream. Even pro-Western rebel militias in the area admit that the level of support received from the council is at present minimal.

They have promised to take on Jabhat al-Nusra once the fighting is over, but they are split and fighting among themselves, with their lack of money forcing some to turn to looting and extortion to fund themselves, further alienating the local population.

Jabhat have used their greater proficiency at fighting, honed by jihad in Iraq and elsewhere, to take a leading role at the battlefront. “They are more disciplined,” Abu Hamza, a fighter with a rival Islamist rebel brigade in Aleppo admitted. “When they attack, they make a plan first, and then stick to it.”

Their battlefield supremacy has enabled them to seize the economic as well as the military high-ground.

In Raqqa, they also control flour production, earning money from selling to bakeries, some of which they own as well. “Jabhat now own everything here,” one disillusioned secular activist said.

In other places they sell the flour at a loss, further endearing them to the local population.

Until now it has been a virtuous circle. Well-funded anyway from foreign contributions, they are able to avoid levying the fees – some say bribes – to pay their men and for supplies that have made other brigades increasingly unpopular. That in turn has been a major boon to recruitment, with thousands defecting to them.

Jabhat al-Nusra’s rule has not been easy. It has had to fight opposed local brigades, and has begun to face protests over its hardline policies – most recently last week after their public execution of three captured soldiers in Raqqa’s town square. The group said this was revenge for a massacre of civilians by pro-Assad forces in the coastal town of Baniyas.

Ominously, this was done in the name of “Islamic State of Iraq and Syria”, suggesting that Jabhat al-Nusra at least in the east is now fully under the control of the murderous Iraqi mother group.

Few are concerned about the downsides, though one man showed huge weals that had grown under his arm which he blamed on his days inhaling the dense black smoke.

One Mansoura man, Mahmoud Ismail, a computer technician who had come to the desert site to visit friends and was watching them pour petrol into barrels to take away, said he had tried the work for a single day. But he then gave it up when he thought about what he was inhaling.

With that, he flicked his cigarette on to the ground, and stamped it out.