Syria Begins to Break Apart Under Pressure From War 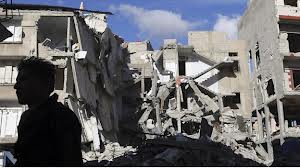 The black flag of jihad flies over much of northern Syria. In the center of the country, pro-government militias and Hezbollah fighters battle those who threaten their communities. In the northeast, the Kurds have effectively carved out an autonomous zone.

After more than two years of conflict, Syria is breaking up. A constellation of armed groups battling to advance their own agendas are effectively creating the outlines of separate armed fiefs. As the war expands in scope and brutality, its biggest casualty appears to be the integrity of the Syrian state.

On Thursday, President Obama met in Washington with the Turkish prime minister, Recep Tayyip Erdogan, and once again pressed the idea of a top-down diplomatic solution. That approach depends on the rebels and the government agreeing to meet at a peace conference that was announced last week by the United States and Russia.

“We’re going to keep increasing the pressure on the Assad regime and working with the Syrian opposition,” Mr. Obama said. “We are going to keep working for a Syria that is free of Assad’s tyranny.”

But as evidence of massacres and chemical weapons mounts, experts and Syrians themselves say the American focus on change at the top ignores the deep fractures the war has caused in Syrian society. Increasingly, it appears Syria is so badly shattered that no single authority is likely to be able to pull it back together any time soon.

Instead, three Syrias are emerging: one loyal to the government, to Iran and to Hezbollah; one dominated by Kurds with links to Kurdish separatists in Turkey and Iraq; and one with a Sunni majority that is heavily influenced by Islamists and jihadis.

“It is not that Syria is melting down — it has melted down,” said Andrew J. Tabler, a senior fellow at the Washington Institute for Near East Policy and author of “In the Lion’s Den: An Eyewitness Account of Washington’s Battle with Syria.”

“So much has changed between the different parties that I can’t imagine it all going back into one piece,” Mr. Tabler said.

Fueling the country’s breakup are the growing brutality of fighters on all sides and the increasingly sectarian nature of the violence.

Recent examples abound. Pro-government militias have hit coastal communities, targeting Sunni Muslim civilians. Sunni rebel groups have attacked religious shrines of other sects. A video circulating this week showed a rebel commander in Homs cutting out an enemy’s heart and liver, and biting into the heart.

Analysts say this shift in the nature of the violence will have a greater effect on the country’s future than territorial gains on either side by making it less likely that the myriad ethnic and religious groups that have long called Syria home will go back to living side by side. As the momentum seesaws back and forth between rebels and the government, the geographic divisions are hardening.

After steadily losing territory to rebels during the first two years of the conflict, government forces have progressed on a number of key fronts in recent weeks, routing rebel forces in the southern province of Dara’a, outside Damascus and in the central city of Homs and its surrounding villages.

These victories not only reflect strategic shifts by government forces but also could further solidify the country’s divisions.

Since mass defections of mostly conscripted soldiers shrank the government’s forces earlier in the uprising, it has largely given up on trying to reclaim parts of the country far from the capital, said Joseph Holliday, a fellow with the Institute for the Study of War in Washington.

Instead, the government has focused on solidifying its grip on a strip of land that extends from the capital, Damascus, in the south, up to Homs in the country’s center and west to the coastal area heavily populated by Mr. Assad’s sect, the Alawites.

Other than hitting them with airstrikes or artillery, Mr. Assad has made little effort to reclaim rebel-held areas in the country’s far north and east.

The character of those fighting for Mr. Assad has changed, too. As the uncommitted defected, the loyalists remained. “All of these defections and desertions basically created a more loyal and therefore more deployable core,” said Emile Hokayem, an analyst with the International Institute for Strategic Studies, who is based in Dubai. “At least you know who is fighting for you.”

Mr. Assad has also come to rely more heavily on paramilitary militias that draw largely from his Alawite sect and other minorities who consider him a bulwark against the rebels’ Islamism. More recently, fighters from Lebanon’s Shiite militant group Hezbollah have added extra muscle, especially in the border region near the town of Qusair, an area dotted with Shiite and Sunni villages that has seen intense fighting in recent months.

“He told jokes, was very funny,” Mr. Mourad said. “He was very relaxed and relieved.”

In the void left by the government in the country’s north and east, rebel groups have seized swaths of territory and struggled to establish local administrations.

Although the Obama administration and its allies share the rebels’ goal of removing Mr. Assad from power, they have little else in common with the many rebel brigades that define their struggle in Islamic terms and seek to replace Mr. Assad with an Islamic state. Among them is Jabhet al-Nusra, or the Nusra Front, the local branch of Al Qaeda, which the United States has blacklisted as a terrorist group.

The war’s duration and the competition for resources have left the rebel movement itself deeply fractured. Few effective links exist between the rebels’ exile leader, Gen. Salim Idris, and the most powerful groups on the ground.

And recent months have seen increasing fights among rebels, diminishing their ability to form a united front against the government. This week, the Islamist Shariah Commission in Aleppo went after rebels accused of looting. The council sent fighters to surround the group’s headquarters and arrested some of its members, confiscating trucks full of looted goods. The haul in one neighborhood included five washing machines and a television.

Another video, circulated this week, showed a Nusra Front leader in eastern Syria standing behind 11 bound and blindfolded captives. After announcing that they had been sentenced by an Islamic court for killing Syrians, he drew a pistol and shot them in the back of the head, one by one.

Activists later identified the man as a Saudi citizen named Qaswara al-Jizrawi. They also determined that the executions took place months earlier since Mr. Jizrawi was killed in March in a gunfight between his and another rebel group that left dozens of people dead on both sides.

In Syria’s northeastern Hassakeh Province, the country’s largest Kurdish majority area, residents have taken in Kurds fleeing violence elsewhere, expanded the teaching of the Kurdish language in schools and raised militias that have clashed with rebel brigades. Many local Kurds are linked to groups in Turkey and Iraq and hope to use the uprising to push for greater autonomy.

These spreading fissures leave little optimism that Syria can be stitched back together under one leadership in the near future.

“The only real outcome I see in the next 5 to 10 years is a series of cantons that agree to tactical cease-fires because they are tired of the bloodletting,” said Mr. Holliday, the analyst with the Institute for the Study of War. “That trajectory is in place, with or without Assad.”