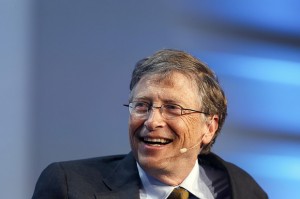 Bill Gates is once again the world’s richest person.

The 57-year-old co-founder of Redmond, Washington-basedMicrosoft Corp. (MSFT) recaptured the title from The Lebanese-Mexican investor Carlos Slim yesterday, according to the Bloomberg Billionaires Index, as the software maker hit a five-year high. It is the first time Gates has held the mantle since 2007. His fortune is valued at $72.7 billion, up 16 percent year-to-date.

Slim’s America Movil (AMXL) SAB, the largest mobile-phone operator in the Americas, has dropped 14 percent this year after Mexico’s Congress passed a bill that could quash the billionaire’s market dominance. That’s helped erase more than $3 billion from the 73-year-old tycoon’s net worth.

“When they’re talking about reform in a country that’s generally poor, and the guy shows up No. 1 on the list — not a good thing,” said Greg Lesko, managing director at New York-based Deltec Asset Management LLC, which oversees $750 million and has an “underweight” position in Slim’s flagship company. “He’s had a pretty good monopoly situation in Mexico, and the Mexican cellphone user has been paying more than he should. We applaud it for the country.”

Earlier this month, a group of kazoo-playing protesters confronted Slim when he appeared at an event at the New York Public Library, denouncing him for overcharging consumers to enrich himself. He denies the accusation.

The bill passed in Mexico last month, which is backed by President Enrique Pena Nieto and is now before state legislatures, would allow regulators to break up phone companies with more than 50 percent of the market or force them to share their networks. America Movil (AMXL) has 70 percent of Mexico’s mobile-phone subscribers and 80 percent of the country’s landlines.

Microsoft shares have surged 28 percent this year, buoyed by cost controls and sales of business and server software amid weak demand for personal computers running the new Windows 8 operating system. Gates’s fortune has also benefited from a rally in stock holdings that include the Canadian National Railway Co (CNR). and waste-collection company Republic Services Inc (RSG).

Berkshire Hathaway Inc. (BRK/A) chairman Warren Buffett is the world’s third-richest person with $59.7 billion, according to the Bloomberg ranking. He is $3.7 billion ahead of SpaniardAmancio Ortega, Europe’s wealthiest person.

Ingvar Kamprad, the founder of IKEA, ranks fifth with a $55.6 billion fortune. The world’s largest furniture retailer generated more than $36 billion in revenue and $4 billion in net income in 2012.

Google Inc. (GOOG) co-founders Larry Page and Sergey Brin have seen their fortunes rise more than 22 percent year-to-date as shares of the world’s most popular search provider have surged. They rank No. 18 and No. 19 respectively.

The fortune of Elon Musk, the founder and largest shareholder of electric-car maker Tesla Motors Inc. (TSLA), has accelerated 128 percent year-to-date. The Palo Alto, California-based company increased the size of its equity and debt offerings by 30 percent to as much as $1.08 billion to build up its cash reserves and repay its loan to the U.S.

The Bloomberg Billionaires Index takes measure of the world’s wealthiest people based on market and economic changes and Bloomberg News reporting. Each net worth figure is updated every business day at 5:30 p.m. in New York and listed in U.S. dollars.