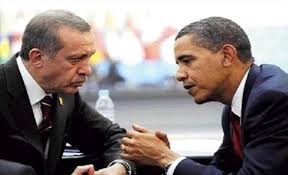 The two met in Washington as efforts to bring the Assad regime and the Syrian opposition together at an international conference next month gathered pace.

At a joint White House news conference, the Turkish and US leaders restated their position, but Obama admitted: “There is no magic formula for dealing with an extraordinarily violent and difficult situation like Syria’s.”

Obama later said the US had seen evidence of chemical weapons being used in Syria. but that it was important to get more specific details about alleged chemical attacks.

The BBC reported that residents of Saraqeb, a north Syrian town near Aleppo, told a reporter that government forces had dropped poisonous gas canisters on them from helicopters.

The Syrian Government has repeatedly denied claims it has used chemical agents.

World leaders have been beating a path to Moscow’s door in recent days, amid hopes that Russia can sway the Assad regime to come to negotiations, and end the killing which human rights activists say has claimed some 94,000 lives.

Obama has made strenuous efforts to court the Turkish leader but there are signs of frustration in Ankara, which is struggling under a tide of Syrian refugees, at Obama’s cautious approach on Syria.

The President has baulked at providing arms and ammunition to the guerrillas, fearing they could fall into the hands of extremist elements linked to al-Qaeda.