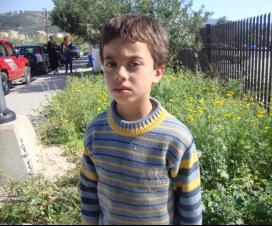 Beirut, Lebanon- “They shot them, they shot my mama and dad,” 9-year-old Abdullah shouted, looking left and right with fear in his face. He would not give his family name.

Abdullah, a Syrian civil war refugee, was begging in front of a coffee shop in northern Lebanon’s ancient coastal city of Batroun, 30 miles from Beirut.

In his scruffy pullover and jeans and tattered sandals, he is the face of a generation of young Syrians who have borne much of the burden of Syria’s 2-year-old conflict. Both of his parents were killed early in the civil war, he said.

A senior source in the Lebanese General Security office, in Beirut, speaking on condition of anonymity, said that that more than 900,000 Syrian refugees have entered Lebanon since the conflict began, via three legal border crossings and by air into Beirut.

The Syria Regional Refugee Response, a website maintained by the Office of the U.N. High Commissioner for Refugees, says about 450,000 of these refugees are registered with the U.N. refugee agency — and half of these are under 18.

Abdullah is typical. He told UPI Next that he lives with nine unrelated refugee children, and a man he wouldn’t further identify, in a small room at the top of a Batroun building. Abdullah wouldn’t show the building to UPI Next or provide details on its location. Abdullah’s group gathers every Friday with other Syrian refugees near the Christian town’s sole mosque.

Abdullah appeared hungry and said he only eats once a day but refused an offer of food. He also said he isn’t enrolled in school.

“We are extremely worried,” Dana Sleiman, a spokeswoman for the U.N. refugee agency, told UPI Next. She said enrolling Syrian refugee children in school has been difficult, adding these children have significant psychological and social support needs.

She said the agency’s “major concern” is keeping Syrian refugee children off the streets. Begging and child labor are “a reality and it is really alarming,” she said.

“We are talking about 7-year-old children, and I’ve seen them myself working in the Bekaa, north and different areas,” Sleiman said, referring to harvesting and other heavy forms of child labor.

Refugee parents, she said, fear sending their children to school because of security concerns and transportation costs. Some, she added, are “too depressed” to consider education, or decide it is not worth the effort, since they will soon be back in Syria.

Lebanon’s public schools lack the infrastructure to accommodate young Syrian refugees, Sleiman said. In addition, she said, Syrian students face difficulty catching up with the Lebanese curriculum, which requires fluency in both English and French.

Various U.N. agencies are providing Syrian refugees in Lebanon’s northern and Bekaa Valley regions with food, healthcare, shelter and education, Sleiman said, based on their need.

“Many,” though, “are still living in dire conditions,” in makeshift settlements or collective shelters without adequate water and sanitation, Sleiman said.

Funding isn’t keeping pace with the increasing needs of Syrian refugees, she said.

Referring to Syrian refugees in his country, Lebanese Social Affairs Minister Wael Abu Faour told UPI Next “We are facing a real crisis and there is nothing much to do about it, since we are unable to differentiate between cases of child exploitation and the ones of real poverty,” adding that authorities are unable to cover “the gap in number of adequate institutions.”

Faour said child beggars had disappeared from Lebanon after a campaign last year but the problem has now become “massive,” with the influx of Syrian refugees.

Faour’s ministry, together with the Interior and Justice ministries, recently launched a “Removal of Street Children” campaign, which led to the arrest of 40 members of a gang that was recruiting homeless children as street beggars and removed 90 Lebanese children from the streets, but Faour said none of the children were Syrian refugee children.

He has asked U.N. officials, the Arab League and others to help Lebanese authorities deal with the Syrian refugee crisis by financing shelters for Syrian children and disabled refugees, similar to those in Turkey, Jordan and Iraq.