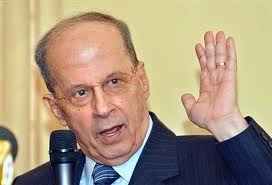 Free Patriotic Movement leader MP Michel Aoun was angered by the agreement reached between The Lebanese Forces party and its March 14 ally the Future Movement and criticized on Wednesday the political parties’ failure to approve the Orthodox Gathering electoral law during a parliament session.

Aoun said at the parliament : “Some of the parties that backed the proposal abandoned it therefore toppling the most important law for Christians,”

adding: “The same concessions that were made during the approval of the Taif Accord are being repeated today.”
“We were waiting on this historic day for a fair electoral law to be approved,” he stated.

Aoun accused the Christian parties that did not back the Orthodox Gathering draft law of violating the principle of coexistence in Lebanon.

“We are concerned with offering fair representation for Christians, while the others only care about gaining more seats in parliament,” said Aoun

The Orthodox Gathering proposal had been rejected by President Michel Suleiman, caretaker Premier Najib Mikati, the Future Movement , MP Walid Jumblat’s National Struggle Front and independent Christian MPs. They claim that it encourages extremism and leads to more sectarianism in the country.