Argentina’s Deadbeat Special: Buy a 4% Bond or Go to Jail 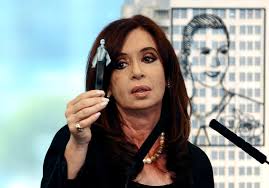 The tax authority announced the plan May 7, highlighting its information-sharing agreements with 40 nations and warning Argentines who don’t use the three-month amnesty window that they risk fines or arrest. Evaders have two options for their cash and the only one paying interest will be a dollar bond due in 2016 to finance YPF SA (YPF), the state oil company. The 4 percent rate is a third the average 13.85 yield on Argentine debt and less than the 4.6 percent in emerging markets.

A year after seizing YPF, Fernandez is funneling more money into the nation’s energy industry as the government struggles to boost production from the world’s third-biggest shale oil reserves. With Argentina already committed to pumping $2 billion of central bank reserves into a fund for energy investments and the highest borrowing costs in emerging markets keeping it from issuing debt abroad, the government is eyeing the billions of undeclared dollars that Argentines hold to help shore up reserves that have dwindled to a six-year low.
“The authorities need to take steps to open up external resources in the energy sector and to finance the Treasury and local governments,” said Sebastian Vargas, a New York-based analyst at Barclays Plc. “The amnesty is not negative for markets but it’s disappointing because they do little to solve balance-of-payment difficulties.”

A press official from the federal tax agency declined to comment in an e-mail on how much the government expects to collect through the amnesty.

Economy Ministry press officer Norma Madeo didn’t respond to an e-mail and a telephone message from Bloomberg seeking a similar comment, and YPF spokesman Alejandro Di Lazzaro declined to comment on how the plan will affect the company.

Argentines have at least $160 billion of undeclared funds, equal to about 36 percent of the nation’s gross domestic product, and $40 billion are hidden inside the country, Vice Economy Minister Axel Kicillof said at the May 7 press conference where he and other senior officials presented the amnesty.

Many Argentines hide assets to avoid a 35 percent income tax and a levy of as much as 1.25 percent on their personal wealth. Undeclared assets are also beyond the reach of the government, which in 1989 seized bank certificates of deposit in exchange for bonds and in 2002 converted dollar deposits into pesos.

Those joining the plan would be immune from prosecution and won’t be forced to pay past-due taxes, said Ricardo Echegaray, head of the tax agency. The search for evaders, which includes cross-checking information on income and personal wealth reports with purchases of real estate and cars, foreign travel and credit card purchases, will continue, Echegaray said.

“You better bring your dollars back because we will find you,” Echegaray said at the May 7 press conference. Last year, tax collection in South America’s second-largest economy rose to 37 percent of gross domestic product from 16.5 percent in 2002, according to Economy Ministry data.

Former Vice Economy Minister Roberto Feletti, who is now a congressman for Fernandez’s Victory Front alliance, said the government expects to attract at least $5 billion under the program.

YPF, which Fernandez expropriated from Spain’s Repsol SA, needs to finance a $37 billion five-year program to expand production and reduce the country’s need to import oil and gas, which doubled to $9.4 billion in 2011. The country’s biggest energy producer, refiner and distributor is also seeking partners to develop the Vaca Muerta shale formation, a Connecticut-sized area in southern Argentina that contains at least 23 billion barrels of oil.

The amnesty program will probably fail because its benefits don’t outweigh investors’ mistrust of the government’s ability to rein in inflation, cut spending, attract foreign investment and restore confidence in the currency, according to Moody’s Analytics Inc.

“The problem the government faces is lack of credibility and lack of confidence,” Juan Pablo Fuentes, an economist at Moody’s, said in a telephone interview from West Chester,Pennsylvania. “That money is potentially there, it could come back eventually, but there needs to be a lot of changes. These bonds are not going to have any real impact.”

Last year, the government reported a deficit equal to 2.4 percent of GDP, the biggest shortfall since 2001, when it reached 3.3 percent of GDP.

Consumer prices rose 10.6 percent in the 12 months through March 31, according to official data, while private economists put the increase at more than 24 percent.

In February, Argentina became the first country to be censured by the International Monetary Fund for the inaccuracy of its economic statistics. Government data have been questioned by economists and labor leaders since early 2007, when Fernandez’s late husband and predecessor, Nestor Kirchner, changed senior staff at the national statistics institute.

Since her re-election in October 2011, Fernandez has banned most currency purchases, limited imports and restricted the remittance of dividends abroad by units of foreign companies to stem capital outflows that almost doubled to $21.5 billion that year.

Unable to buy currency, Argentines have turned to an illegal market to acquire dollars. The black-market rate for the dollar reached a record 10.4 pesos on May 8, compared with the official rate of 5.21.

The peso weakened 0.05 percent to 5.2240 per dollar at 11:26 a.m. in Buenos Aires. The cost to insure Argentine debt against default within the next five years through credit default swaps fell 42 basis points to 2,560 basis points at 11 a.m in Buenos Aires, the highest in the world, according to data compiled by CMA Ltd.

Argentina’s last effort to bring undeclared funds back into the country, announced in 2008, attracted $4 billion, according to Echegaray.

Eduardo Hecker, who was the head of the country’s national securities commission at the time, said while the latest amnesty program might not succeed in bringing back a significant amount of assets from abroad, the increased monitoring of income and spending by the tax authorities could encourage investors to declare funds held inside the country. He estimated that the amnesty might attract about $5 billion.

“Those holding the money overseas won’t be among the largest declarers as they have already paid the cost of getting the money out,” said Hecker, who runs Del, a company that gives advice on financial regulations. “Those holding undeclared funds in the country will declare the most. It’s a safe way for them to declare profits and not be scared of the taxman.”

Photo: Argentine President Cristina Fernandez de Kirchner holds a sample of the first petroleum extraction in Argentina as she announces that oil company YPF, controlled by Spain’s Repsol, is subject to expropriation and that a bill being introduced would give the state a 51 percent share, during a speech at the presidential palace Casa Rosada in Buenos Aires on April 16, 2012. Photographer: Daniel Garcia/AFP via Getty Images