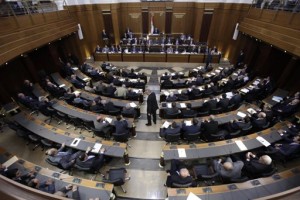 Several Lebanese parliamentary blocs decided to boycott the May 15 Parliament session , because the only item on the agenda will be the vote on the so-called Orthodox Gathering electoral law proposal, according to local media reports.

“The Future Movement bloc, the National Struggle Front, caretaker premier Mikati and independent MPs will boycott the parliamentary session dedicated to discuss the Orthodox draft on May 15,” Future television reported on Monday.

Speaker Nabih Berri who called for the May 15 session has been quoted as saying that he would allow MPs to discuss several electoral proposals before calling for a vote on the Orthodox Gathering plan which divides Lebanon into a single district and allows each sect to vote for its own lawmakers under a proportional representation system.

The Orthodox Gathering draft-law has been approved by the joint parliamentary committees despite the objection of Future Movement, the centrist National Struggle Front of MP Walid Jumblatt and March 14 alliance’s independent Christian lawmakers.

The rival parties have not been able to reach consensus on a hybrid proposal which was the latest plan being discussed by the different blocs as an alternative to the Orthodox plan. The hybrid proposal calls for combining the winner take all and proportional representation systems.

It remains unclear whether the May 15 session will be able to garner a quorum.

MP Akram Shehayeb, a key member of the Progressive Socialist Party which regards itself as a centrist , confirmed Tuesday that his National Struggle Front bloc would boycott the  May 15 session.

“We confirm that we won’t attend the session,” Shehayeb said after a meeting with caretaker Interior Minister Marwan Charbel on Tuesday.

“We refuse to approve in Parliament what the Lebanese  Civil War failed to endorse,” Shehayeb said in reference to the Orthodox proposal.

The PSP opposes the Orthodox proposal, arguing that it will further increases sectarian divisions in the country.

While not announcing a boycott of the session, Batroun MP Butros Harb, representing independent Christians allied with the March 14, warned against “imposing the Orthodox Gathering law in Parliament” and urged the speaker to reconsider his decision to place the draft on Parliament’s agenda.

The Lebanese Forces and the Phalange Party  MPs have yet to make a final decision on whether to attend or boycott the session.

Geagea also revealed late Monday that he discussed the subject of the elections law with  Hariri in a telephone call.

While he admitted no major breakthrough was made during the conversation with Hariri, Geagea said progress had been made over the outlines of an alternative hybrid electoral proposal (that combines the winner-takes-all system and proportional representation).

“I received a phone call from Hariri and we spoke for over an hour … we have put every effort for the sake of the hybrid law, but there are many details that we have not agreed on,” Geagea told MTV station late Monday.

“We will keep trying until the last minute to reach an agreement on all the details,” he stressed.