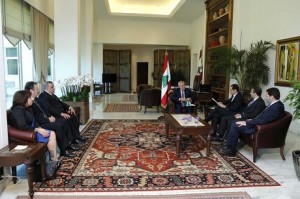 Lebanon Pesident Michel Suleiman said on Monday that he supports the initiative proposed by the Phalange party, which calls for a constitutional amendment that will incorporate neutrality in order to dissociate the country from the conflicts surrounding it.

“The initiative is necessity during the current developments in the region,” Suleiman said after talks with a Phalage party delegation at the Baabda Palace.

The delegation was headed by MP Sami Gemayel and included MPs Nadim Gemayel, Elie Marouni, Samer Saadeh and Fadi el-Haber. It discussed the initiative with Suleiman and requested an amendment to the constitution .

“The Baabda Declaration must be adopted in the constitution and in the laws so that no one can act against it. It will be considered illegal if the declaration is breached,” Gemayel said last week.

The Phalange Party MP expressed concern over the participation of some Lebanese parties in the Syrian conflict, which he said “has started to spill over to Lebanon.”

“The involvement of any party in the conflict may lead to the implication of other parties,” Gemayel added.

Hezbollah has come under criticism for reportedly fighting on the side of the Syrian regime against rebels in the Al-Qusayr area and outside Damascus, with news outlets in the past weeks reporting that a number of party members had been killed while fighting in Syria.

Hezbollah’s Secretary General Sayyed Hassan Nasrallah vowed in a televised address earlier in May that “friends” of the Syrian regime would not allow it to fall and that his party would defend Lebanese Shiites residing in Al-Qusayr.