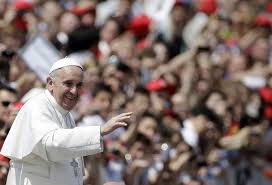 Pope Francis on Sunday gave the Catholic church new saints, including hundreds of 15th-century martyrs who were beheaded for refusing to convert to Islam, as he led his first canonization ceremony Sunday in a packed St. Peter’s Square.

The “Martyrs of Otranto” were 813 Italians who were slain in the southern Italian city in 1480 for defying demands by Turkish invaders who overran the citadel to renounce Christianity.

Their approval for sainthood was decided upon by Francis’ predecessor, Benedict XVI, in a decree read at the ceremony in February where the former pontiff announced his retirement.

Shortly after his election in March, Francis called for more dialogue with Islam, and it was unclear how the granting of sainthood to the martyrs would be received. Islam is a sensitive subject for the church, and Benedict stumbled significantly in his relations with Muslims.

The first pontiff from South America also gave Colombia its first saint: a nun who toiled as a teacher and spiritual guide to indigenous people in the 20th century.

With Colombia’s President Juan Manuel Santos among the VIPS, the Argentine pope held out Laura of St. Catherine of Siena Montoya y Upegui as a potential source of inspiration to the country’s peace process, attempted after decades-long conflict between rebels and government forces.

Francis prayed that “Colombia’s beloved children continue to work for peace and just development of the country.”

He also canonized another Latin American woman. Maria Guadalupe Garcia Zavala, a Mexican who dedicated herself to nursing the sick, helped Catholics avoid persecution during a government crackdown of the faith in the 1920s.

Also known as Mother Lupita, she hid the Guadalajara archbishop in an eye clinic for more than a year after fearful local Catholic families refused to shelter him.

Francis prayed that the new Mexican saint’s intercession could help the nation “eradicate all the violence and insecurity,” an apparent reference to years of bloodshed and other crime largely linked to powerful drug trafficking clans.

Francis told the crowd that the martyrs are a source of inspiration, especially for “so many Christians, who, right in these times and in so many parts of the world, still suffer violence.” He prayed that they receive “the courage of loyalty and to respond to evil with good.”

The pope didn’t single out any country. But Christian churches have been attacked in Nigeria and Iraq, and Catholics in China loyal to the Vatican have been subject to harassment and sometimes jail over the last decades.

Christians in Saudi Arabia must worship out of the public eye because the ultraconservative kingdom does not officially permit churches and non-Muslim religious sites.

Francis, the first pope from the Jesuit order, which is known for its missionary zeal, praised the Colombian saint for “instilling hope” in the indigenous people. He said she taught them in a way that “respected their culture.” Many Catholic missionaries over the centuries have been criticized for demanding natives renounce local traditions the outsiders viewed as primitive.

He hailed the Mexican saint for renouncing a comfortable life to work with the sick and poor, even kneeling on the bare floor of the hospital before the patients to serve them with “tenderness and compassion.”

Mother Lupita’s example, said Francis, should encourage people not to “get wrapped up in themselves, their own problems, their own ideas, their own interests, but to go out and meet those who need attention, comprehension, help” and other assistance.

After shaking hands with the prelates and VIPS in the front rows at the end of the Mass, Francis shed his ceremonial vestments. Wearing a plain white cassock, he climbed into an open white popemobile to ride up and down the security paths surrounding the crowd of more than 60,000.

He stopped to pat children on the head, kiss babies and bantered in his native Spanish with some at the edge of the crowd.