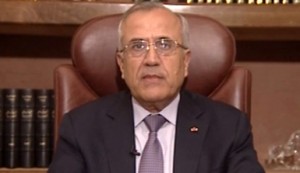 President Michel Suleiman said Friday that the Baabda Declaration and defense strategy that puts Hezbollah’s arms under the command of the Lebanese army are the only way to defend Lebanon against Israeli aggression .

“The Baabda Declaration and a defense strategy that places the resistance’s arms at the will of the army are the only way to protect Lebanon against any Israeli assault.” He said in a statement

Suleiman’s remarks come a day after Hezbollah’s chief Hassan Narsallah responded defiantly to Israel’s recent air strikes in Syria, saying his group would receive advanced weapons from Syria and vowed to use all Hezbollah means to support the “liberation of the Israeli-occupied Golan Heights. ”

“We announce that we stand by the popular resistance in the Golan Heights and we offer both out military, financial and moral support in an effort to liberate the occupied territory.”

The Baabda Declaration, approved during a national dialogue session in June 2012, calls for Lebanon to disassociate itself from regional conflicts.