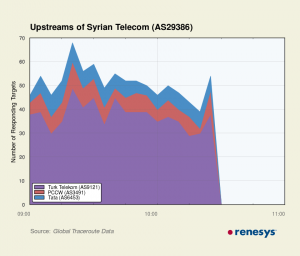 The Syrian regime has apparently repeated its withdrawal of route announcements to take the country off the Internet, as previously happened in November 2012.
Internet connections between Syria and the outside world were cut off on Tuesday, according to data from Google Inc and other global Internet companies.

Google’s Transparency Report pages showed traffic to Google services pages from the country, embroiled in a civil war that has lasted more than two years, suddenly stopping shortly before 3 p.m. EDT (1900 GMT). Google traffic reports continued to show no activity there about four hours after the drop-off.

The last nationwide outage was widely interpreted as precursor to some kind of major escalation of violence by the regime, which didn’t eventuate (this is not to minimise the scale of violence daily taking place in Syria, only a caution against over-interpreting the new outage).

“We’ve seen this twice before,” said Christine Chen, Google’s senior manager for free expression. “This happened in Syria last November and in Egypt during the Arab Spring.” 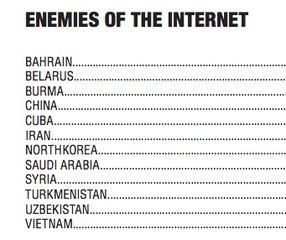 Google’s data showed traffic disruptions limited to Syria and spanning the entire country. Shutting an entire nation from the Internet is possible because IP addresses, individual connections established by each device, are geographically specific and the government has control over the country’s Internet service providers.

The vast majority of websites within Syria were rendered unreachable as well, other experts said, as the county appeared to shut itself off. As during Arab Spring disruptions, Google said its Speak2Tweet service, which broadcasts voice messages, was up and running in Syria for people with access to a phone.

“Although we can’t yet comment on what caused this outage, past incidents were linked to both government-ordered shutdowns and damage to the infrastructure, which included fiber cuts and power outages.”

Hubbard wrote on an OpenDNS blog that a similar Internet blackout in Syria occurred in November and lasted three days. About 80 Internet pathways normally are listed by Syrian providers, but only three were being advertised to machines searching for connections late on Tuesday.

“The outage took place very quickly, was seen throughout the world, and (with a few small technical exceptions) covers the entire Syrian Internet,” Cowie said in an email to Reuters.

“We don’t see any effects in neighboring countries, and we don’t see anything to suggest that the outage was caused by damage to one or another of the several cables that connect Syria with the outside world,” he added.

Neither Syria’s ambassador to the United States nor the country’s envoy to the United Nationscould be reached for immediate comment.

The Center for Democracy & Technology in December condemned the previous network shutdown in Syria, calling it an “indefensible violation of human rights” and a “dangerous and desperate interruption of the free flow of information.”

Top Photo: A graphic shows all three cables that are currently serving the country are down. All the three cables land at the coastal city of Tartous. The cables are : Turk telecom ( purple), PCCW ( orange) and TATA( blue)