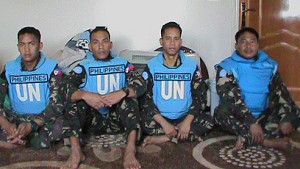 A group of Syrian rebels have used their Facebook page to announce that they are holding four Filipino UN peacekeepers in the demilitarised zone between Syria and the Israeli-occupied Golan Heights.

The Yarmouk Martyrs Brigade said the operation was carried out for the observers’ own protection during clashes and heavy shelling in the area.

The UN said they were taken near the narrow area of no-man’s land between Syrian and Israeli forces.

Israel has been on alert for possible retaliation after its fighter jets attacked targets near Damascus.

But it believes the clashes in the Golan Heights are not connected.

In March Syrian rebels seized a group of 21 Filipino peacekeepers in the same area and held them for three days before releasing them.

Like them, the latest men to be taken are part of the UN force whose role is to enforce a ceasefire.

It has regularly complained of incursions by the Syrian army and rebels.