Sports will now be allowed in some Saudi girls schools 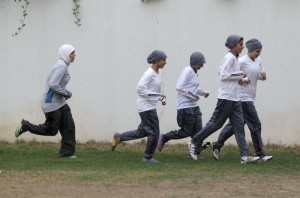 Saudi Arabian girls will be allowed to play sports in private schools for the first time, according to a decision announced on Saturday, the latest in a series of incremental changes aimed at slowly increasing women’s rights in the ultraconservative kingdom.

Saudi Arabia’s official press agency, SPA, reported that private girls’ schools are now allowed to hold sports activities in accordance with the rules of Shariah, or Islamic law. Students must adhere to “decent dress” codes and Saudi women teachers will be given priority in supervising the activities, according to the Education Ministry’s requirements.

The decision makes sports once again a stage for the push to improve women’s rights, nearly a year after two Saudi female athletes made an unprecedented appearance at the Olympics.

“It’s about time,” said Aziza Youssef, a professor at King Saud University. “Everything is being held back in Saudi Arabia as far as women’s rights.”

Youssef said she sees the decision to allow sports for girls in private schools as part of package of wider reforms targeting women, but that continued restrictions on sports is a discrimination that negatively impacts women’s health.

Education Ministry spokesman Mohammed al-Dakhini was quoted in SPA saying that the decision to allow girls to play sports in private schools “stems from the teachings of our religion, which allow women such activities in accordance with Shariah.”

The government had previously quietly tolerated physical education in some private schools, but there is no set curriculum.

The decision, which also orders private girls’ schools to provide appropriate places and equipment for sports, is a monumental step that will likely soon affect public schools and universities, which are also gender segregated, Youssef said.

Deputy Minister of Education for Women’s Affairs, Nora al-Fayez, was quoted in local press saying recently that there is a plan in place to expand sports education in public schools. It remains unclear if girls would have access to the same level of physical education as boys.

Sports for women in Saudi Arabia have been largely a pastime of elites who can afford expensive health club memberships. They are often attached to hospitals since women’s gyms were closed in 2010 on grounds they were unlicensed.

Saudi Arabia allowed two female athletes to compete in last summer’s Olympics only after the International Olympics Committee had put intense pressure on the kingdom to end its practice of sending only male teams to the games. Their participation was not shown on Saudi TV stations.

Women’s sports remain nearly an underground activity in the kingdom, which is home to Islam’s holiest site in Mecca.

Only the largest female university in the kingdom — Princess Nora Bint Abdul Rahman Unviersity — has a swimming pool, tennis court and exercise area for its students. No other university in Saudi Arabia has sports facilities for its female students and staff.

Women are also bound by strict rules when it comes to their attire, so they cannot, for example, be seen by men while jogging in sweat pants. Almost all women in Saudi Arabia cover their face with a veil known as the “niqab,” and even foreigners are obliged to respect local culture and wear a loose black dress known as the “abaya.”

Female athletes cannot register for sports clubs or league competitions. They are banned from entering national trials, which makes it impossible for them to qualify for international competitions.

The government has turned a blind eye, though, to tournaments where all female teams play against one another.

Saudi Arabia’s King Abdullah is seen as pushing for these reforms. Other Saudi rulers have also quietly tried to modernize the country, with King Faisal’s wife opening the first school for girls in the late 1950s.

But the monarch is facing edicts from powerful and influential senior Saudi clerics who are against all types of sporting activities for women. They argue that in order for a woman to remain protected from harassment, she must avoid public roles.

Despite such rhetoric, thousands of women work as doctors and professors in Saudi Arabia. Women will be allowed to run for office and vote for the first time in the 2015 municipal elections.

There have also been a number of incremental and significant changes that have afforded women new roles in recent months.

A law was implemented last year to allow women sales clerks’ jobs, and women now have seats on the country’s top advisory council. A woman was licensed to practice law for the first time last month, and a ban was lifted on allowing women to ride motorbikes and bicycles.

But with each move comes restrictions.

Women are only allowed to sell at female apparel outlets, such as lingerie stores. The 30 women who now serve on the country’s Shura Council, which advises the king, were segregated from the 130 men in the chamber, and plans for a proposed barrier that would separate the genders remains under discussion. Moreover, there are no guarantees that women who become licensed lawyers will not face discrimination in the courtroom. Lastly, women may be allowed to ride bikes in parks, but they have to be accompanied by a male relative and dressed in the “abaya.”

In other areas, women’s freedoms are still severely limited. They are not allowed to drive nor are they allowed to travel or attend school without the permission of a male guardian.

A 52-page report on women’s sports in Saudi Arabia issued by Human Rights Watch last year urged the government to set benchmarks for physical education, to set a curriculum to follow and to launch a public outreach campaign about girls’ rights to physical education.

“Although religious views opposing prohibition on women’s participation in sport are less frequently pronounced than those in favor, government policy is only inching toward realizing women’s right to sport rather than taking bold steps to realize it,” the report said.

Photo credit: AP | FILE – In this May 21, 2012 file photo, members of a Saudi female soccer team practice at a secret location in Riyadh, Saudi Arabia. Saudi Arabia’s official press agency says the Education Ministry has allowed private female schools to hold sports activities within the Islamic Sharia laws. SPA said Saturday, May 4, 2013 that the ministry issued directives ordering private female schools to provide appropriate places and equipment for such activities, adhere to wearing decent dress and that Saudi women teachers should be given priority in supervising these activities.(AP Photo/Hassan Ammar, File)