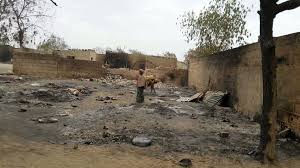 ABUJA: Clashes between rival ethnic groups have killed at least 30 people in eastern Nigeria’s Taraba state since they erupted on Friday, police said.

Members of the Jukun ethnic group were marching through the small commercial town of Wukari to a funeral, when an argument broke out with local Hausa and Fulani youths, which quickly degenerated into pitched battles with guns and machetes. Attackers also set fire to around 30 houses, police said.

“Now we are in full control, although the crisis claimed 30 lives,” police spokesman for Taraba state Joseph Kwaji said, adding that 40 suspects have been arrested.

Taraba state is part of Nigeria’s volatile ‘Middle Belt’, where the largely Christian south and mostly Muslim north meet. The middle belt often sees violence between semi-nomadic, cattle-keeping communities like the Fulani and settled farming peoples like the Jukun, over land disputes.

The fact that Fulani settlers tend to be Muslim, and other ethnic groups including the Jukun are mostly Christian, sometimes gives the conflict in the middle belt a religious dimension.

Nigeria is Africa’s top oil producer and most populous country, with an estimated 170 million people. Most live in poor rural areas and have few formal means of arbitrating disputes.

Communal violence has also flared this year in Plateau state, which borders Taraba. Last month the US Commission on International Religious Freedom, a bipartisan US government agency, said more than 100 people had been killed in clashes there since March, and it urged the government to do more to tackle what it called religious violence.